How To Deal When People Disappoint You

Play Higher Resolution
Play Lower Resolution
Feeling depressed after people you love disappoint you, can happen. After hitting rock-bottom, Daniel, a student, wants to know how he can have a happy life.
Transcript

Brother Donald: When was the last time you felt truly happy? What were you involved in, who was with you if in fact somebody was with you? And how long did that feeling of elation last? Today, I’m talking to Daniel. He’s a young student and athlete who resides here in Toronto, Canada. And for as long as he can remember he’s never felt truly content or truly happy. In fact, he questions whether what he really experienced was happiness. All because of the disappointments that would follow immediately. These days, happiness is something that everyone strives to obtain, considering how complex life is.

Brother Donald: Self-help is an $11 billion industry in North America alone. And among its popular topics is the pursuit of happiness.

The self-improvement market in the U.S. is worth an estimated $11 billion.

Brother Donald: The very same pursuit that Daniel’s been concerned about for so many years of his young life. He’s here to talk about his search and the struggles that he encountered as he chased after happiness. So, join us in our conversation and let’s look for The Solution together.

Brother Donald: Welcome to the program. Can you tell the viewers a little about yourself?

Daniel: My name is Daniel Bardoo. I currently go to high school at Winston Churchill. I was born in Canada, but my mom is from Saint Vincent and my dad is from Trinidad.

Brother Donald: From Saint Vincent, so your parents are from the Caribbean islands?

Daniel: Not anymore. I finished my bible studies. I am now waiting for baptism.

Brother Donald: Well congratulations. And God be willing in a few months now you’ll become a bonafide baptised member of the Church. So, what brings you to the program today?

Daniel: I wanted to know; how do I find true happiness? What I mean by that is, I always experience happiness, like throughout my life. I’ve always experienced that. But its always been taken away or its been just ruined by something. And it’s never lasting.

Brother Donald: When it comes to your mom and your dad, are they still together?

Brother Donald: No. But your moms been there to look after you?

Daniel: Oh yea, my mom has always been there.

Brother Donald: You have siblings, you have brothers and sisters?

Daniel: I have six siblings.

Daniel: My older ones are by themselves right now. And then I live with the younger ones.

Brother Donald: I see. And your mom is looking after you, taking care of you?

Brother Donald: When it comes to your mom, how is she coping [with] being a single parent?

Daniel: It’s tough for her. But she’s been doing it for so many years. But I still feel bad. Because she doesn’t have that helping hand that she needs to take care of all of us. I feel like I owe it to her because of all the sacrifices she made for me and my siblings growing up. She met this man and he was like a father-figure to me, because me growing up, I didn’t have that father-figure.

Brother Donald: How old were you when he came into the life of your mother?

Daniel: I want to say like thirteen, fourteen. And at first, I didn’t like him because before him there was another man. Who also disappointed me. He came into our lives and said that he would make things better, and then ended up leaving. But he proved me wrong for a while and he stayed. And I finally looked and saw him as my dad. And then he left.

Brother Donald: You probably felt so down at that time in your life.

Brother Donald: Because not only did he fail your expectations, but most especially the expectations of your mother.

Brother Donald: So perhaps it’s not just you, it’s also your mother who may have gone through those feelings of being happy. But then sadly, replaced too soon when it comes to disappointment.

Daniel: Well one of the more recent ones I met someone, and we connected right then and there. I really cared for that person, and she really cared for me. We would always be there for each other. And all of a sudden, you know she just disappears. When I needed her most.

Brother Donald: Well nothing new when it comes to other people, even servants of God. Because we can read here in Job 3, and the verses are 24 to 26:

For sighing has become my daily food;
my groans pour out like water.
What I feared has come upon me;
what I dreaded has happened to me.
I have no peace, no quietness;
I have no rest, but only turmoil.”

Brother Donald: Perhaps this is what you felt when what you believed was a solid a good relationship with your friend all of a sudden just disappear.

Daniel: I was going through some tough times. I was going through some depression. I decided to, I guess isolate myself. Because I figured if I did that, I couldn’t be disappointed anymore. But that only made things worse. And then I became suicidal. I’ve thought [that] if I just ended it then, right then and there, that I wouldn’t experience that kind of disappointment ever again. I could just end the pain.

Brother Donald: Perhaps out of a drastic thought, you thought of just ending it so that would be the end.

Brother Donald: Well as you grow up even more Daniel, you’ll understand that people usually disappoint another person eventually. There is something about life that we need to understand, first and foremost. And what is it? We will read here in the Book of Job, the chapter is 8 and the verses are 13 to 15:

Such is the destiny of all who forget God;
so perishes the hope of the godless.
What they trust in is fragile;
what they rely on is a spider’s web.
They lean on the web, but it gives way;
they cling to it, but it does not hold.

Brother Donald: As we make our way through life all the more we should rely and trust in our Father in heaven, and not upon our fellow man. They may offer help unto us. They may be able to assist us for some time. But just like you experienced, the time may come they are unable to do so. And usually it is because they have to now face their own predicament. Their own situation, so they prioritize. And sometimes, sadly, it means to say that a relationship with another person it suffers. But with the Almighty God, He is always there.

Brother Donald: And that is why we should place our hope and trust in Him. And most especially when it comes to His promises.

Daniel: So, if I ever get disappointed again. Or if reach those low points that I have in the past, what can I do?

Brother Donald: That’s a good question Daniel. Let’s allow the Bible to give us the solution to that situation. We can read the following from the book of Psalms. Let’s read chapter 42 and the verse is 5:

Why am I so sad?
Why am I so troubled?
I will put my hope in God,
and once again I will praise him,
my savior and my God.

Brother Donald: Just like this servant who came to a point where he was downtrodden. He was disappointed, but then he reminded himself. I will put my hope in God and once again I will praise Him my Savior and my God. When it comes to praising God, that is usually done when it comes to worshiping Him. So, this is the reason why the worship service for the members of the Church of Christ is so important Daniel. It is where we gain that strength and also the solutions to our problems. And also, God has plans for us. And we can read that in Jeremiah 29, and the verses are 11 to 12:

I alone know the plans I have for you, plans to bring you prosperity and not disaster, plans to bring about the future you hope for. Then you will call to me. You will come and pray to me, and I will answer you.

Brother Donald: We should place our hope and trust in God. So in order for us to know the plans that God has for us, what is an integral part of being a servant of his? Prayer.

Brother Donald: That’s why God says you will call to me. You will come and pray to me. And I will answer you. May God hear and answer your prayers Daniel. Especially after going through so many disappointments and hardships in your young life.

Daniel: Thank you for having me Brother Donald. I’m sure that what I’ve learned today will help me in the future.

Brother Donald: And I am sure it will help because what we studied are the words of God written in the Bible. It is a pleasure having you on the program Daniel. God bless, we wish you the best for the future. Thanks for joining our conversation today on The Solution. I’m Brother Donald Pinnock and we hope to see you next time. 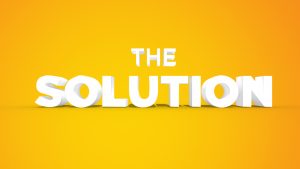 How To Deal When People Disappoint You