Attending a Bible Study Led Me to God 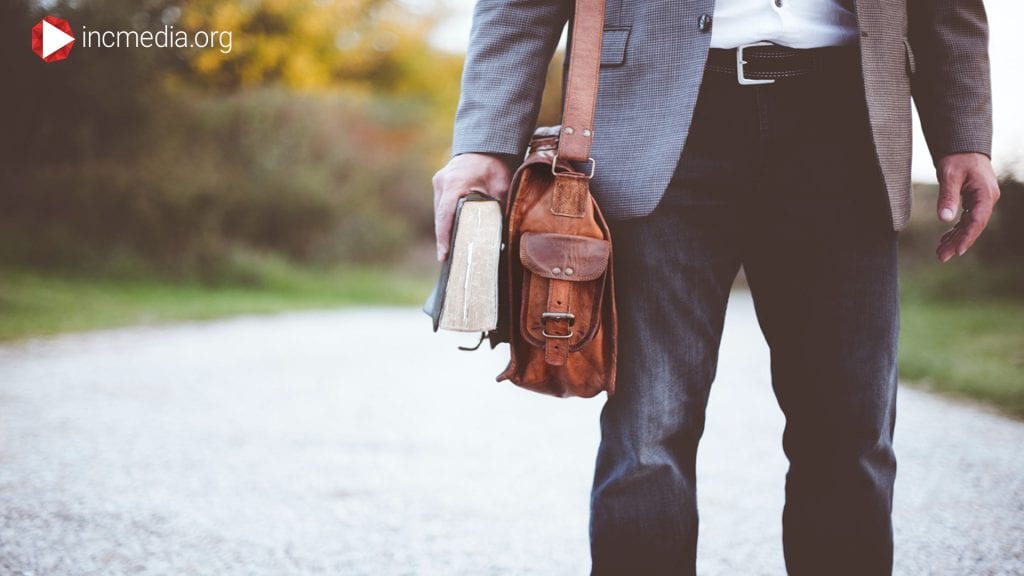 Growing up, Michael always loved science. So when his love for science challenged his Catholic upbringing, he knew he had to seek out the answers.

“Mentally, I just tried [to] see if I can bridge together some sort of common line between science and religion. It made more sense to me that God created us for a purpose and a reason.”

One question led to more questions

How far would you go to find answers to the big questions in your life? Would you read books? Research online? Ask experts?

Would you be okay with just any answer, or would you keep looking until you found something more substantial? Michael didn’t want just any answer to his questions about God and why people were created. He wanted the truth.

So he started his search the way many do. He started on his own.

“I had read the Bible from cover to cover just trying to find my own answers for the questions that I had. Now, a lot of the things I read, for me, just didn’t make a lot of sense. That was my mistake. I read the Bible thinking it was just like any normal book, but it wasn’t.”

While Michael didn’t set out to question his religious upbringing, the more he looked for answers, the more doubts set in about his Catholic faith.

“The biggest sore thumb for me was the fact that it is written [in the Bible] that we shouldn’t worship or [bow down] to idols. When you walk into a Roman Catholic [place of worship], there [are] idols everywhere. Saints, statues, big crosses. All of those things [just] didn’t sit well with me.

A lot of the teachings that the Roman Catholic [Church] instilled into its people are contradictory to what is written. It did not feel right to go [into] a Roman Catholic Church, looking at all the objects [images] and knowing that [these are prohibited] in the Bible.”

Doubts fuel a search for truth

As Michael’s doubts about Catholicism made him feel even further from the answers he was looking for, his friend Ericson invited him to listen to the teachings in the Church Of Christ.

Attending a Bible study in the Church Of Christ

“It wasn’t until I actually was able to sit down with a minister during one of the Bible lessons in the Church Of Christ and ask questions that things very much began to make sense to me. It felt right when I attended a Bible study. I was able to get my questions answered and have a minister who took the time to sit and explain and make sense of the Bible in a way where it wasn’t contradictory.”

Finally having someone give him the answers from the Bible opened the floodgates to the long list of unanswered questions Michael had held onto for many years.

“A lot of the questions that I had were regarding the book of Revelation, and they ended up getting answered. Things weren’t very clear to me back then regarding that particular book because it pertained to the end days, and the salvation of humans, salvation in the Church Of Christ. I asked a lot of questions regarding who is going to be saved, what do the trumpets mean, what were the things that John saw in his visions.”

“All those questions were answered by the minister.

At that point, I knew that I’d found the place where I needed to be.”

Sharing the truth he found in the Church Of Christ

Now that Michael knew where he could finally get his Bible questions answered, he wanted to share it with someone who was on a similar search.

“Jennie was a very important person in my life. We met in 9th grade in 1997, and then we ended up meeting again in junior year when I asked her to become my girlfriend. We continued to date [through] college and when I was introduced to the Church Of Christ, I asked her to join me.

I said they’re answering all my questions, they’re giving me time to ask, and they’ll explain it to me. At the time, she was also looking for answers herself. She was a Pentecostal, but not practicing, and she was looking for some sort of religion. So I invited her, and she came, and she had her own questions and they were answered.”

Finally having their religious questions answered, Michael and Jennie now had a biblical foundation to build their life on. Together.

“I think we influenced each other to become better people. It may not have been that way had we not been in the Church Of Christ. Our lives could have been totally different. But a renewed faith in God greatly improved our relationship, which ultimately culminated in us being married in 2006. We had a baby boy in 2011.”

A foundation for a happy family

Today, Michael and Jennie live in Florida with their two boys.

“The Church Of Christ gives me and my family structure. It gives us rules and regulations that we need to abide in God’s word. We [the parents] have to be prime examples [for our children]. Our main responsibility as their parents is to make them understand and show them that the path to salvation is here and not anywhere else.

I feel that without joining the Church Of Christ, I wouldn’t be the person I am today. It’s given us hope. It’s given us something to look forward to.”

Wondering if attending a Bible study in the Church Of Christ is for you?

Can you relate to Michael’s story? You’re not alone. It’s a story that has brought many individuals like Michael to attend a Bible study in the Church Of Christ (Iglesia Ni Cristo).

With a simple question and answer format, the answers you’ll receive during a Bible study in the Church Of Christ are never anyone’s opinion. Instead, they are always the words of God written in the Bible.

So if you’ve been carrying unanswered questions about God and your religious upbringing, maybe it’s time to get them answered. Set up a time for a Bible study with a minister of the Church Of Christ and start asking your questions.

Reasons Why I Left the Jehovah’s Witnesses