The Details That Make the Building 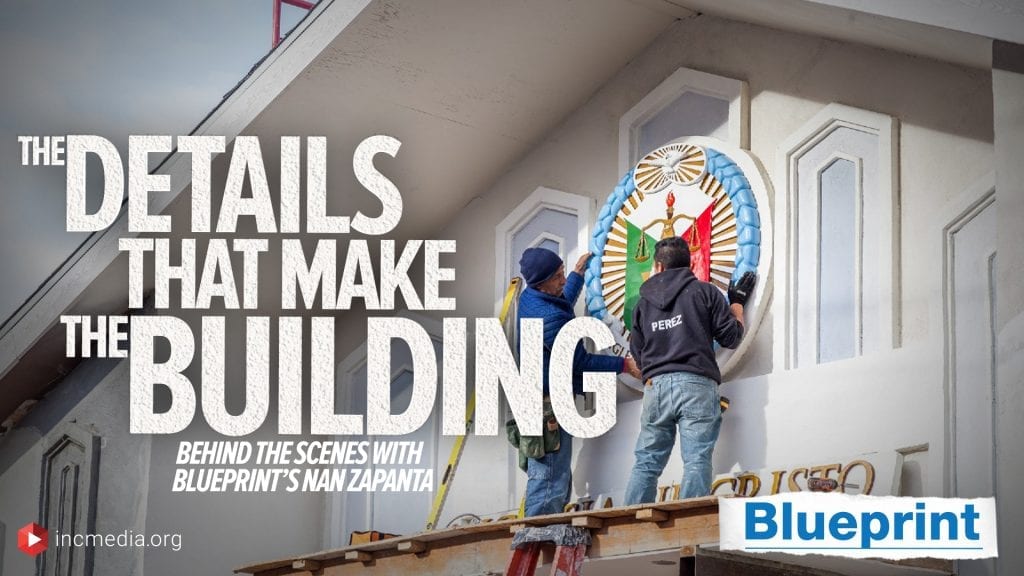 Shooting the show Blueprint has given me the opportunity to explore 7 different houses of worship, with each visit offering a new experience. It’s mentioned numerous times on the show that there are distinct design cues that unify all the houses of worship in the Iglesia Ni Cristo. But each house of worship is also very much different from one another – let’s take a look.

This was by far the coldest trip we had. Whenever there was any break in filming around the city, we were off searching for warmth. It was no different when we were filming on the outside grounds of the house of worship. But once we entered the house of worship, there was a different kind of warmth. My colleague, Michael Bigayan, grew up in Regina and was with me at the time. It was a meaningful moment for him, so I felt privileged witnessing his first look inside the house of worship. There was truly something special about walking into the sanctuary and seeing the pulpit and choir loft area, most particularly the ceiling above it. This is my favorite feature of the house of worship in Regina. There are wooden beams, that were left bare, that converge right above the pulpit, perfectly framing it in a way that I haven’t seen in any other Iglesia Ni Cristo house of worship since. I love that it establishes a clear and definitive focal point in the sanctuary.

I grew up in Texas, so I’m very familiar with the saying “everything is bigger in Texas.” The house of worship in Lubbock most definitely lived up to this statement considering it is the largest building and sanctuary we’ve featured on Blueprint so far. It has a seating capacity of 484. The size of the sanctuary is undeniable. Its A-frame design, high ceilings, large choir loft and pulpit area all contribute to the grandness of the sanctuary. But the scale of the building alone isn’t necessarily my favorite detail. It’s more the fact that the design has managed to be grand yet intimate at the same time. It offers solitude in such a large space, which is a testament to the thought and care that the designers put into the renovation of this building.

My favorite detail of the house of worship in South Jacksonville is also its size. But not because it is large, but because it’s one of the smaller houses of worship we’ve featured on the show. Despite its smaller size, it still has a grand presence about it. The two steeples at the front of building are a major contributing factor to this, but there are also some small details too that can be found inside that surprisingly add to that feeling of grandness, namely the chandeliers. The ornate design adds a flare of grandeur to the more intimate size of the sanctuary.   If you watch the episode, you’ll see why choir members have fallen in love with it.

I’d never been to New Jersey before, but it was interesting to see a more historic portion of the United States. The surrounding architecture, for the most part, was a window to the past. So driving down the street and seeing the Jersey City house of worship slowly emerge from the rows of houses and buildings of the past was really exciting. The first thing that catches your eye — the flag-poles, proudly flying the American and Iglesia Ni Cristo flags, a testament to the unity of the congregation with the very country it is found in and most importantly, the entirety of the Church. The elevated entry is another feature I haven’t seen in any houses of worship so far. It’s a dual stair-case that leads to the elevated entry. The walk up the stairs leaves no doubt that you are entering a very special place.   I was glad the team caught my reaction walking into the sanctuary – it really was breathtaking.

What I found interesting about the Bakersfield house of worship is that there was a more literal connection to the term “house of worship” because it looks very much like a house. Which is fitting since it is nestled on a row of houses on the outskirts of a neighborhood. On the front facing side, a large window forms one of the corners. It actually pops out from the structure and reminds me of a reading nook seen in some homes. There are also large framed windows on one side that closely resemble the same orientation found on some homes. Finally there are three framed windows that pop out along the second floor that are similar to the attic windows of older homes. But what I find really interesting is that although it has details often found in homes, it still leaves no doubt that it’s a special place – a place of worship.

The steeples are a prominent feature in almost every house of worship in the Iglesia Ni Cristo. Often times, the steeples themselves have a great amount of detail. But what many don’t see is what’s on the inside and how these steeples are structured. The steeples in Mountain View were fabricated and installed in a much different way. You’ll have to check out the episode to find out how.

The first time I visited the house of worship in Corona, it was prior to any renovations. I remember thinking “Wow, this has a lot of potential.” It’s an impressive A-frame structure on a sprawling property, but the building looked like its best days were behind it. So when I found out later on that it was undergoing renovation, I was excited to see how it would turn out. I was fortunate enough to make multiple visits to this house of worship throughout the process and seeing the progression was awesome. The building itself is slightly elevated above the rest of the property and the front façade is by far the largest we have featured on the show. Its size, along with the great detail and molding work, make it the most prominent structure in the surrounding area. You definitely have to see it in person to fully appreciate it.

Nan Zapanta is a staff writer at INC Media and is the host of Blueprint. He is also the producer for Kindness Moves and the INC Giving Show. He enjoys exploring the outdoors with his wife and their puppy.