5 Things My Kids Taught Me About Me 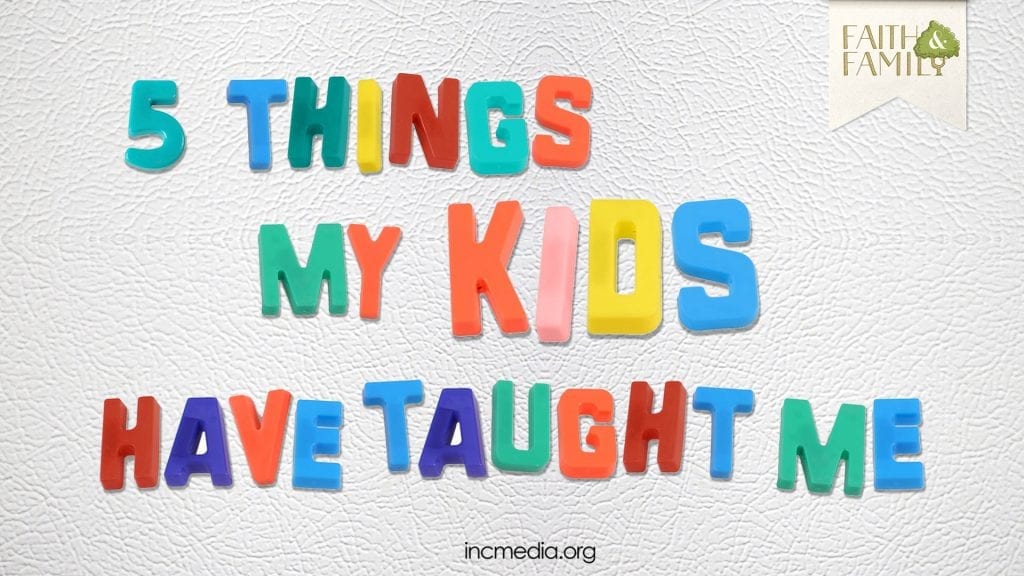 Here’s five stories that will crack me up until the day my kids have kids. In each of them, I learned something from one of my children during a moment where I thought I was the one doing the teaching. We all could do with a little more listening when it comes to our parenting styles.

After dropping the Kindergartener off at school, the 3-year old and I were walking back to the mini-van (you know, the one I never saw myself driving in the first place) and we walked past a yard with a dog. My son with his big, full, brown eyes looked up at me and with all honesty, with full conviction and belief, said:

“That dog will not eat me.”

Well son, I could have told you that. First, there’s no way any teeth-baring mammal would be able to claw past me to get to you, even if its intention was truly to eat you. And second, there’s a huge fence. Should I be worried that the concept of fencing is beyond you?

He knows who is, what he is and his purpose in life – to NOT be dog food. Ok, the capacity to understand what fences are for is now a side-matter. He’s onto higher philosophical matters.

Horrendous application of pluralization also aside, he taught me a few things in this moment. The cartoon stereotype of dogs eating bones and meat is a heavy one, which can’t be beat, apparently, by the fact he feeds our own dog dry-food twice a day and never realized it wasn’t meat. He also taught me that no matter the stereotype, there’s always room for a little fun and imagination, there’s always room for french fries.

2. Stay in the lines

He’s three and just started to get interested in coloring. With our daughter, as soon as her little fingers could hold a crayon she’s been coloring, but with the boy – not so much. So any display of creativity is encouraged, whooped-and-hollered about, and posted on social media with pride.

“Look, I colored the heart red!”

Ah! Color recognition! Shape recognition! Proper pronoun usage! And alas, it really was a red heart that he colored! (He has made similar proclamations while coloring a cow purple, for example.)

-”But I didn’t stay in the lines” (insert sad, pouty toddler face here)

Quick, do I encourage, do I chastise, do I shrug off his self-disappointment? What did that last blog tell me to do!? Quick, the moment is passing and these are so rare!

“Well, did you try your best?”

Yes, good answer. Not condescending, not alarmed at his failure, not condemning.

I rolled my eyes so far that I saw yesterday – a response definitely not in the mommy-blogs. But we laughed together at ourselves and I learned from him that a boy’s creativity isn’t the same as a girl’s, and that his journey will be different from my daughter’s. And more importantly, I learned that if I had taken two seconds to pause before even speaking, I would have seen that his red heart was actually colored in perfectly and that the whole exchange was just to get me to laugh at some silliness of his. He won, again.

Not all women are the best when it comes to sons, and that’s probably not the last time I’ll tell my son to “fetch” instead of “catch”. I don’t know what to do with his hair, I don’t know how to dress him. I don’t know how to teach him the range of emotions a man should have, bare, express and spread. I can’t teach him how to be a brother. But his kisses are the best, and the giggles are worth the (unbelievably immense amount of) frustration of a baby underfoot.

Can’t wait until he’s a big kid and we can really play catch. I mean, fetch!

4. Pirates are a real concern

Not a week goes by where the girl, age 5, doesn’t confirm with me that geographically pirates are not within our vicinity. What ocean are they in? (But what ocean do we live by again?) What kind of boats do they have? (Because the ones with the sheets don’t exist anymore, right?) What do they want? (Do they know we don’t have treasure?)

“I know why God didn’t let us be alive when pirates were a long time ago.”

“Because he didn’t want any of us to be killed, so he didn’t born us yet.”

Makes sense to me. Boiled down: in my young daughter’s eyes, God protected His people from pirates – end of story. All of my explaining away, all of my world-news-worthy presentation of facts on modern-day piracy were whisked away by a very simple truth: we are God’s people and God will protect us. Then, now, forever. Thank you daughter for the kind reminder, even if in pirate hypotheticals.

5. Nothin’ to complain about

We have a rule: no complaining. Be thankful, be grateful, be and have enough because “enough is enough”. Don’t worry about what you have, worry that others have enough. Don’t worry about amounts, worry about sufficiency. It’s a common thread for parents – how do we teach gratitude for our very own life, much less all the little things along the way?

“I need this more than I wanted that….”

“But, I just love being alive!”

All I had to tell her was one word, “enough”, and it triggered in her all the moments where we’ve pointed out how much “enough” she already has. It is a word often used by parents to signify a halt, an abrupt end to a conversation. But for us it is a reminder also – that we have and we are enough.

And she also taught me that some days, we all just want to whine. That sometimes whining isn’t necessarily complaining – it’s venting, it’s letting off steam about a totally different topic that is out of our control and when as a five-year-old she probably has a long list of life’s topics that are out of her control. Letting her whine allowed her to reset herself, which is what we all need sometimes isn’t it?

Naomi De La Cruz is a staff writer at incmedia.org, has been married for 10 years (to someone she fell in love with at four years old) and together with her husband have 2 children whom alternately lick, kick or hug each other depending on the day of the week.

6 Ways to be an Encouraging Wife

Marriage: Knowing When to Give and When to Take

His Version of Romance