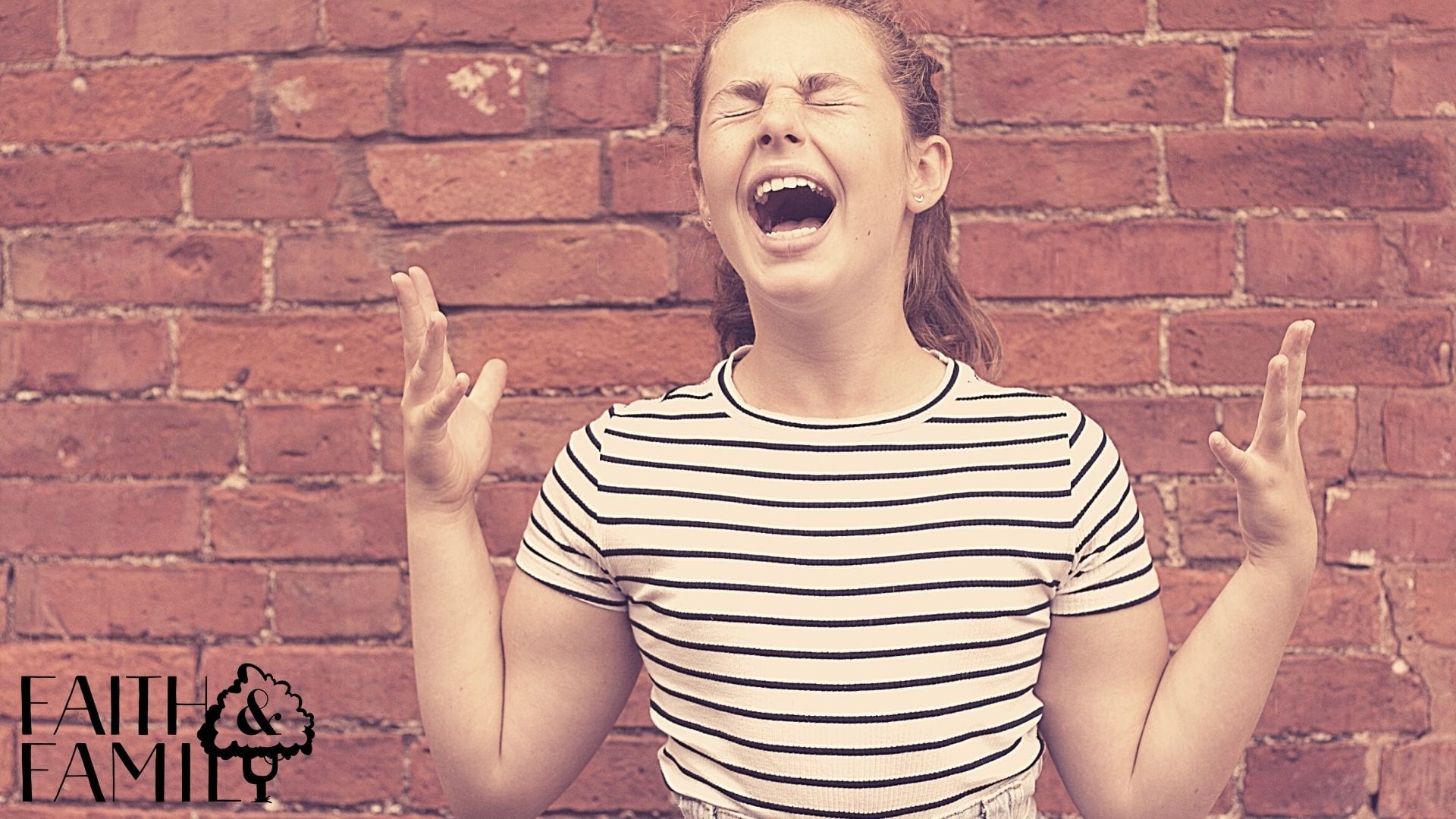 It’s Time For The Teenage Phase, What Now?

Is it just me? Or did it feel like our kids grew up so fast during these last few months of quarantine, COVID, and all the different things that are changing in the world? Guys, my kid is a teenager now. And I can actually feel it.

Mariel Gutierrez: No, thank you.

Mariel: Came out with a Fedora, right?

Bernie: Right? The other day I was like, “Why is your door closed?” He’s like, “I need privacy.” And then he started to notice that he’s gotten muscle, he’s beginning to have a mustache. See what had happened was, I was in the bathroom. And I’m like, you know, putting my face on and stuff and he comes in and he starts looking at the mirror and he’s all like looking at himself. He’s like, “Mom, mom I’m getting to have that mustache,” and I’m like, “Yeah look at you.” And he goes, “But you do too.” And so those are the changes in my soon to be eight year old boy going to be like 20.”

Jewell: Yeah. Love it. Love it love it. You know my kids? Well I want to talk particularly about Jasmine. She’s 12 now so she’s preteen. And as you know, Jasmine has always been more the quiet one. Her confidence is really building and she’s being more vocal, which I like. And she’s been taking a lot of initiative. And I think it’s mainly because she’s my firstborn. I mean, she took initiative to do me and Harmony’s laundry and surprised the heck out of us.

Emirick: Are you going to be one of the lucky ones and get one of the like, fabulous teens?

Jewell: No, I think I think because she’s a girl I don’t know. But I actually got teary eyed because I think it’s you know, she’s getting closer to this pandemic thing, her brothers are close to her, so she’s really building confidence. It’s interesting watching her personality develop. So we’ll see where this is gonna lead us.

Emirick: Wow, that’s good. I live in teenage land. I have three teenagers in this house.

Bernie: You’re deep in it girl.

Emirick: Yes, I am from like, 13 to 19. Yeah 13, 16, 19. There are good things and there are some hard things that come along with it. And I’ve learned that teenagehood is expressed differently. Each of my boys are like different kinds of teenagers like when Russell entered teenagehood, he was the anxious, emotional teen crying all of a sudden for like the smallest thing or no reason at all that I can see. And very emotional and expressing himself through art and comics and film. So he’s like the bleeding heart teenager. But when Andrew became a teenager, it was like, brain fog teen. He is the kind that he’s like, “Huh? What’s going on what happened?” Like, we’ll show up somewhere and he’ll be like, “Mom.” I’m like, “What happened?” He’s like, “I forgot to wear shoes out.” But David is emerging to be the Mr. Cool and suave teenager he went and had his hair permed.

Emirick: He’s a very high risk taker. You know, like, he takes risks and which comes with a lot of money.

Mariel: I don’t know how to feel about that. Because like my daughter, I mean, she’s always been sensitive. She’s always been emotional. I don’t know if it’s because she’s a girl. I think that would– I think just kids sometimes are, right? Like whether you’re a boy or a girl sometimes you’re sensitive. She always felt everything so strongly, even when she was little. So I already kind of anticipated what kind of teen she was gonna be. I imagined that was just gonna be amplified and I was kind of right. But there was just this one day where we were trying something new. I don’t know if y’all have tried bar, okay, but it’s all the twitch muscles and it’s very hard. It looks really easy. So anyway, we are attempting it for the first time and then I looked over at her and she had these like big old tears while she was squatting on her toes. And I was like, “Is it that painful? Are you okay?” And then she just bursted into tears and cried and sobbed. And she was like, “Why is everything so hard?” And I was like, “like the workout or like life? Which one?” So like, that’s what I’m trying to navigate right now. Like, I’m sure that there isn’t just one way like how do you deal with it? Here’s how you deal with it. But that is something. What do you guys do?

Mariel: We assume that they know better.

Emirick: We expect them to behave a certain way to make certain choices, but then their brains are still very underdeveloped and so like to simplify if I could simplify it for you guys. What I’ve read is that there’s a brain and the lower brain so the upper brain has that prefrontal cortex, which is in charge of rational thinking, practical decision making, being able to plan out the future and just making rational decisions. That’s the upper brain right? On the lower brain is the limbic system, the amygdala is in charge of emotions. And so that the teenage brain is still developing that upper part. And so that’s why they seem irrational. They feel more than they think like what you were saying Matea. She feels everything. She doesn’t think through it as much. And that’s one thing that I read about the teenage brain, they feel more than they think. And so they act out, they act irrational, and then we expect them to behave like adults, so we’re getting you know, upset with them, and why are they thinking like this and we’re thinking all of these horrible things about our teenager, but it’s not personal. It’s illogical and knowing the development of their brain has helped me to deal with a lot of the teenage quirks. And experts believe that the adolescent brain doesn’t actually phase into adulthood until the age of 25.

Mariel: Wait wait wait,  Does that mean they live with us till 25? Like, we have to be crying during bar?

Emirick: It’s scary because it means we actually release them or, you know, a soft release before their prefrontal cortex is developed. And I think about myself, I was married at 24. That explains a lot from my life.

So, uh, that that is crazy, right? But the more you read up on the topic, the more patient you become with your teenager and the process that they’re going through. I think it’s really important. I read this and this one really hangs out to me for dealing with your teenagers is to remember, connection before correction. And it’s really important to continue connecting with your teenager, even though you feel like they’re being weird. And you want to get as far away from that weirdness as possible, continue to connect with your teenager, be in the know, know what the trends are. Sometimes it’s a different generation and we kind of like as older people as adults, we don’t understand it as well but like I don’t know, as a middle school teacher and as a parent of teenagers–

Mariel: you see it a lot.

Jewell: Yeah. And dealing with my teens. It’s better for me to be vulnerable and honest with them instead of projecting an image of perfection. When I was young, I did everything right. You know, if I come across that way, I’m not as effective in connecting with them,

Okay? So it’s important to be in the know, to understand what’s going on in their world, to know who their friends are. They’re going to be weird and erratic and that’s something we can’t control. That’s why it’s important to be in the know, and to make sure that they’re surrounded by other Christians who care and are constantly reminding them about their faith, so that they don’t make any unwise decisions.

Jewell: You know that makes a lot of sense, because when I was growing up, I was always involved in the youth organizations of the Church Of Christ. And I really learned the importance of having a relationship with God and it made me confident and it helped me make good decisions. And I had friends that reminded me to do the same at all times. And that’s really what I want for my kids. I want them to be surrounded by others who have a good relationship with God and so that they can make good decisions. So when they do make mistakes, right away they think about, “Okay, how can I have this corrected so that I have a good relationship with God?” So I love that.

Emirick: I agree with you Jewell. Because when I was growing up, the youth group that I was involved in at church was my saving grace so many times. When I was having weird emotions or contemplating bad decisions, they were always there to kind of talk me through it and help remind me about what our focus is in life and do it in a way where we were having a good time.

Mariel: That’s cool. Okay, that’s really actually a comfort to know. And the great thing is Matea is blessed to be surrounded by a lot of people that she looks up to at church. Now that she’s a part of the youth group, right? She is an officer in the youth group. And that means she helps the youth group plan things and they do edification things. That means like, help each other out. And they do skits and like really cute things to encourage one another, and the group itself to help strengthen that group. But I think that the great thing actually is that she has a lot of older youth group members to look up to. You know, a lot of these– Well, they’re not kids anymore. A lot of these young adults used to take care of her during children’s worship service. And they’ve seen her throughout like the many phases as well. Maybe not in the capacity a parent would, but the great thing is that they know her, they look out for her even during these times, sometimes they’ll text her, “Hey, how are you holding up?” And I think that Yeah, even just them like, it’s not just me and my husband checking in on her. It’s like the young adults in our church that have gone through it, that understand her and that are looking out for her. I think that has been actually phenomenal for her. It’s been a great–not a parent supplement. You know, but it’s been great, that parts have been great.

Emirick: It takes a village right?

Mariel: There’s a village. There’s the village sometimes in unexpected places because I still kind of see them as, like, little kids, when they were, you know, but now they’re young adults, and they’re helping my kid out, so it’s great. Yeah.

Mariel: Anyway, I wanted to thank you ladies. For being on the call with me today. I really needed to hear your voices and all your wisdom. And I wanted to thank everyone that’s listening to this episode of Faith and Family as well. Remember, it’s gonna be a rough age between 12 to 25. Apparently right Emirick? But let’s not take it personal, that’s what I’m getting. I’m not gonna take it personal anymore, right? It’s not us it’s them, but it’s okay that it’s them because it’s part of growing up.