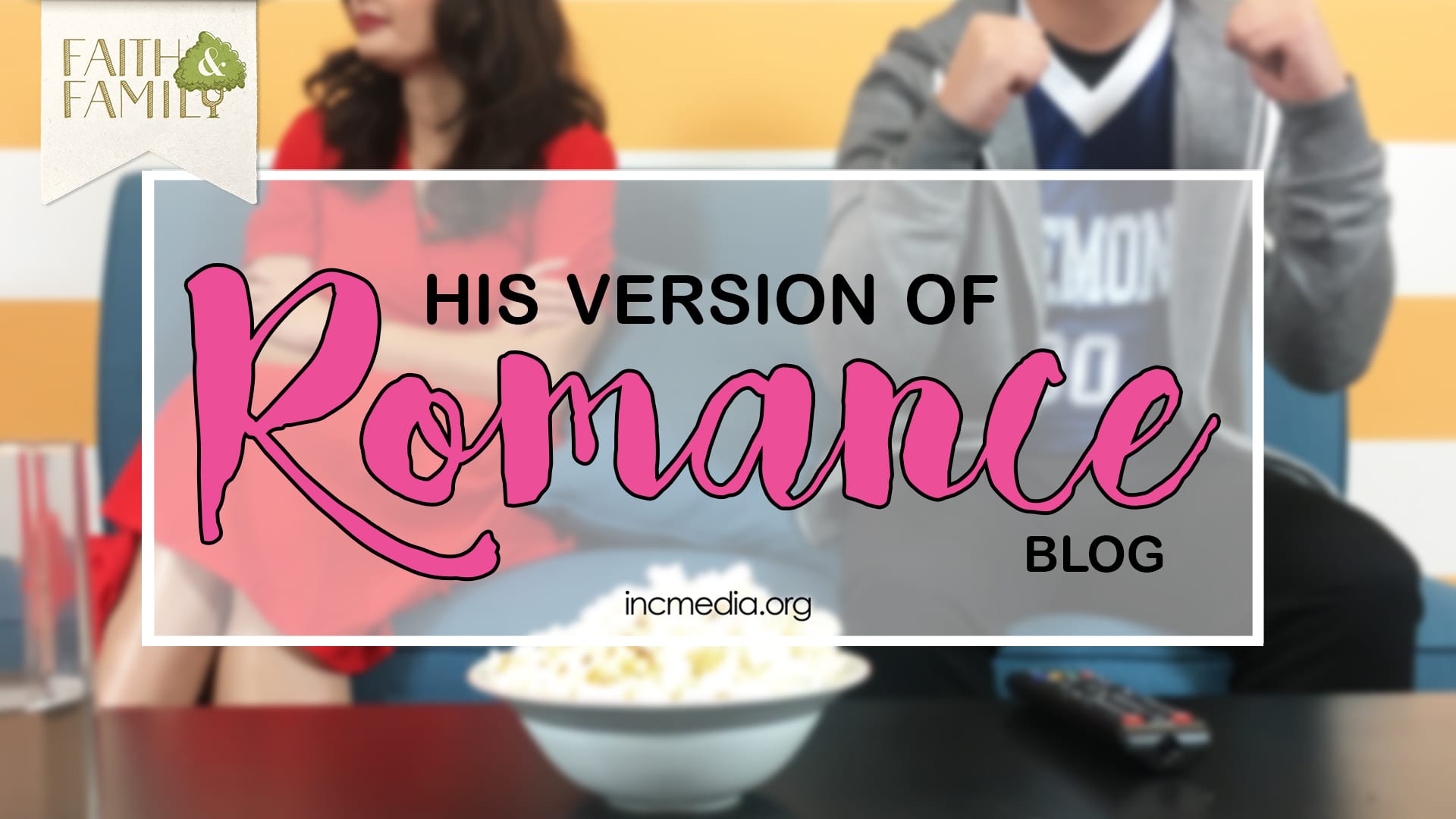 His Version of Romance

Sound familiar? The saying often accompanied by the back of his head lit by the glow of a TV – maybe watching a game, or playing video games virtually simulating the game previously watched, or watching YouTube commentaries of the play by play of the game that… He. Just. Watched. But it’s 9:30 pm already and you’re counting down the hours until it’s time for you to get up and reset your day… seven. You have seven hours left before you need to get up again and you and your husband haven’t held each other, kissed, gazed into each other’s eyes and just plain old adored each other. You roll over your side of the bed, sigh and turn out the light. Sound familiar?

You wonder… why aren’t we romantic anymore? Admit it, you’ve thought it at least once in your marriage, or if it’s been quite a few years, maybe once a day. But if you rewind the day, maybe there are a few romantic moments you might have missed. Here’s a chronological list of how he loves you:

At 6:00 am – when you weren’t looking, he was working out… for you. Ok, yes for him too. Maybe it’s the innate need to be and feel and look like a man that can protect his family, maybe it’s because you said The Rock looked good in Central Intelligence. But he’s doing that for you too. Don’t overlook his efforts when he’s trying to better himself, whether for his health, his looks, or his physical strength. Encourage him, thank him, join him. That activity that you think is his ‘me’ time is really for ‘you’ but can even evolve to ‘us.’

At 7:00 am – while you were at work, he made the kids breakfast, kissed boo-boos and wrestled them into clothes. Any other man would’ve sent your kid to school with a pop-tart, but not your man. After his workout, he made the kids a healthy breakfast, was the sacrificial first-line of defense for their morning wraths, and still loved them enough to put them in clean, weather appropriate clothing. He loves your kids and is an extension of that parenting thing that you both agreed upon. He keeps ‘parenting’ and upholds your rules and style even when you’re not looking. If this isn’t giving you butterflies, I’m not sure what will!

At 8:00 am – after dropping the kids off to school, he went to work. You’re thinking, whatever, that’s something he would have done whether he was married to me or not. You might have overlooked that he chose that company because of the health benefits; he worked and prayed for all those promotions for the sake of providing for your family (and maybe even that makeup addiction you picked up along the way). Maybe he’s not the NBA player he dreamed of becoming when he was young. Maybe it’s because he was never tall or skilled enough to be so, or maybe it’s because he chose and prioritized your family. It’s probably the latter. Don’t think that there aren’t personal things he’s silently wanted but put aside because he put you and the kids first.

At 11:00 am – he texted you during your lunch break… and you scoffed and said “remember when you used to call me during lunch?” Don’t kill his nice gesture. Comparing what used to be to what’s now is a sure fire way to sabotage the romance he is offering you. He thought about you. You also have to remember that his work life has changed significantly since you both were courting. Maybe that kid in the mailroom had all the time to message and call but your man has worked his way up to becoming Senior Designer within those years you’ve been together –his schedule is bound to change. But he’s still thinking of you. Take it as a romance win!

At 3:00 pm – you came home to find he’s pulled the trash bins to the curb because it’s Friday, there’s a load of laundry in the washer, the bed is made and the dishes are clean in the dishwasher. But you breeze past all of it because you’re too tired to notice or to even meet him halfway. Participate in this practice of romance called ‘team work.’ Pull the trash cans back into the garage, put the laundry in the dryer, and put the dishes back in the cupboards. It’s a silent conversation between you two the equivalent of the two-fingers-on-one-hand-pointing-back-and-forth-from-your-eyes-to-his universal symbol of ‘I got you.’ Unless one of you is a neat freak that enjoys and hogs all the chores, chances are chores are just as annoying to him as they are to you. But it’s necessary. He gets it, so do you. Get equally yoked!

At 5:00 pm – after your long day, even though it’s the specific chore you signed up for, he agreed to take the family to eat out. He’s probably calculating and readjusting your family budget in his head, but if it means you can have a moment to breathe, he’s all for it. He gets it: happy wife, happy life. A man that wants YOU to be happy – Nicolas Sparks never wrote a novel/movie more romantic! In between all those moments, he’s tagged you on funny memes, laughed at your silly jokes, rubbed your back when you showed even the slightest hint of stress. You may not realize, but he’s done it. He’s told you he loves you over and over and over again throughout the day, even when you couldn’t hear the words. Don’t miss the moments and effort because you were too focused on what you’ve labeled as romance. Be flexible and compromise at his choice of love language.

So at 9:30 pm when he asks for those ‘five more minutes’ for himself… give it to him. Be interested and ask if you could join him. It could be the romance that he was waiting for all day.

Mariel Gutierrez is a staff writer for INCMedia Services and hosts the Faith and Family podcast Tired Moms.