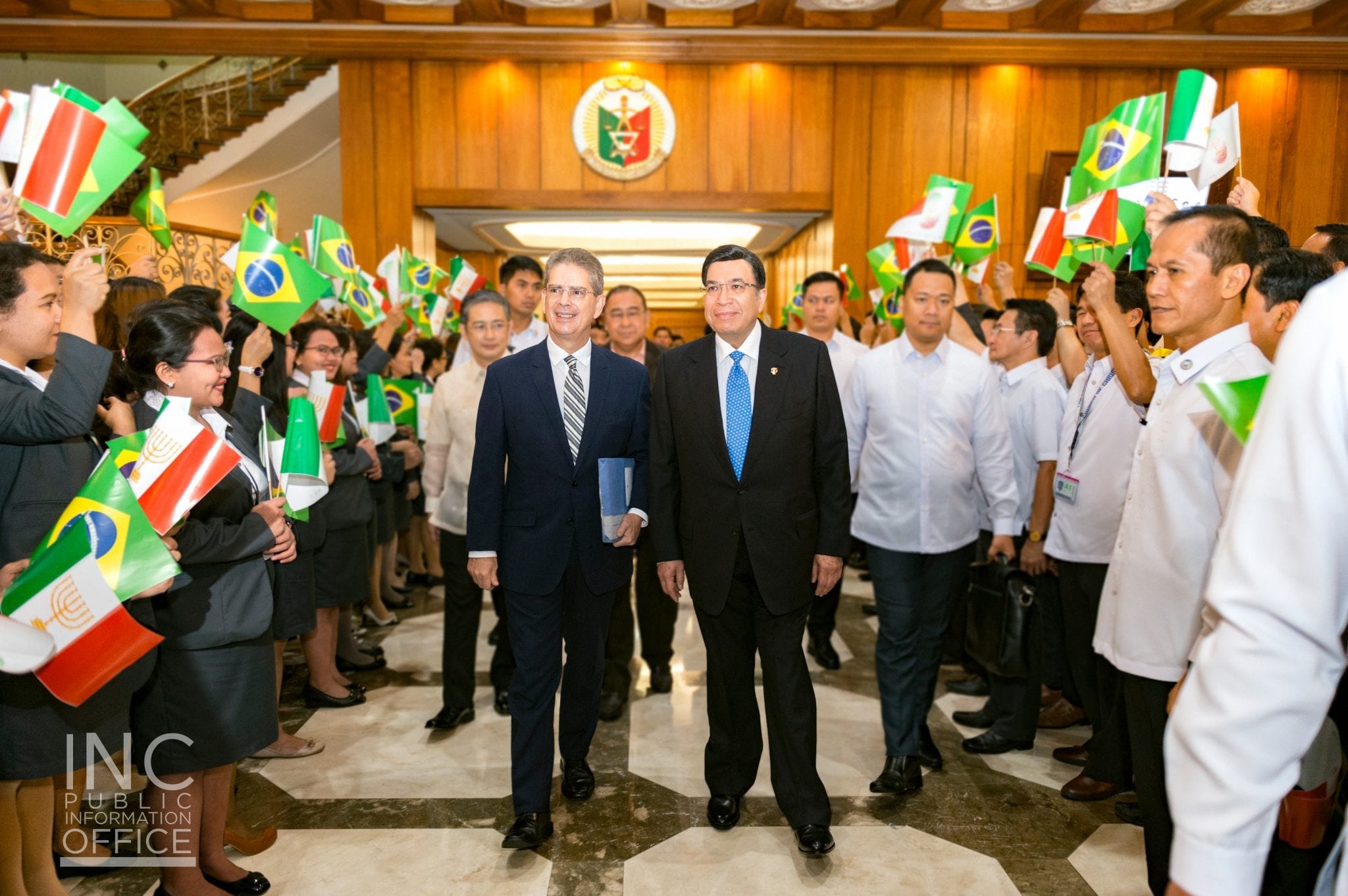 Souza’s visit comes a day after Philippine Ambassador to New Zealand, Jesus Domingo, visited the INC’s international headquarters at the INC Central Office in Quezon City, Philippines. He similarly expressed his intent to “flesh out the partnership of the Iglesia and the Department of Foreign Affairs through the Special Envoy of Overseas Filipino Concerns, the Honorable Executive Minister Brother Eduardo V. Manalo.”

In his capacity as Ambassador to the Philippines, Souza made note of having not only seen the progression of growth of the INC houses of worship all over the country, but also the rapid rise of the Church internationally; most recently, its exponential expansion in Africa and India.

Describing the INC’s historic growth as a “miracle”, Ambassador Souza also expressed his interest to help facilitate, in any way possible, the migration of Portuguese-speaking Ministers, often from the United States of America, to care for the increasing number of congregations and prepare for the expected rapid growth of the Church’s membership in his country.

A growth which will undoubtedly lead to a stronger relationship between Souza’s countrymen in Brazil, and the INC brethren among 142 other nations around the world. Which is why on May 6th, INC members in Brazil and New Zealand will join hundreds of thousands all over the world in the 2nd Worldwide Walk to Fight Poverty – a multi-Guinness World Record event that historically was described as the largest charity walk across multiple venues held in 24 hours. The 2014 event had 519,221 participants from 129 sites across the world, situated in 16 countries – with this year’s event aimed to beat its own record.

During his visit, Ambassador Souza also recounted the recent history of the Church in Brazil and the country’s relationship with the INC dating back to January 2017 when the Executive Minister visited Brazil. Souza extended the gratitude of the tens of thousands of families in favelas who have benefitted from the INC’s Ayuda Para A Humanidade or Aid to Humanity events held six months after the Executive Minister’s visit. More than 20,000 parcels of free food were distributed to families and residents in the four Rio de Janeiro communities of Recreio dos Bandeirantes, Portuguesa, Vila Isabel and Rocinha. By June 23 of that same year, the Iglesia Ni Cristo was registered with the Brazilian government and legally recognized as a religious entity, with the rights and permissions thereof.

And as for the future relationship between the country of Brazil and the INC, “In his visit to the Executive Minister, he expressed his interest in learning more about the INC, more about the Church Of Christ history, as well as developing a strong relationship with the Church, ready to do whatever help he can, whenever he sees also the different programs of the Church in helping our fellow man — including the Ambassador’s own countrymen in Brazil,” stated Minister Joel San Pedro, an INC minister and the INC Central Office Protocol Officer.

Domingo also reported to the Executive Minister the developing relationship he and Minister Teody Samson, District Minister based in Auckland, New Zealand (overseeing 18 local congregations across various Pacific Island nations) are enjoying. “The SCAN [Society of Communicators and Networkers, an organization of the INC] is a vital partner in taking care of the emergency communication needs for the Filipino community” in New Zealand, a nation often-hit by earthquakes, Domingo explained.

Internationally, Domingo praised the INC’s efforts as well, stating that “not only should we assist communities in their immediate needs – food, shelter, and medicine – but their long term rehabilitation, and the key is livelihood. So I was very impressed with the shelters, the housing, the eco-farms, the livelihood,” referring to the recent developments of the INC in sub-Saharan Africa. The INC’s socio-civic programs aim to strengthen the bond between the congregations of the Church Of Christ and the communities in which they serve.

The Iglesia Ni Cristo (INC) or Church Of Christ is a global Christian Church that upholds Bible-based Christian teachings. It comprises 6,000 local congregations and missions in 142 countries and territories (around 370 local congregations and missions are in the US and Canada alone), and its membership consists of 133 ethnic groups and nationalities.