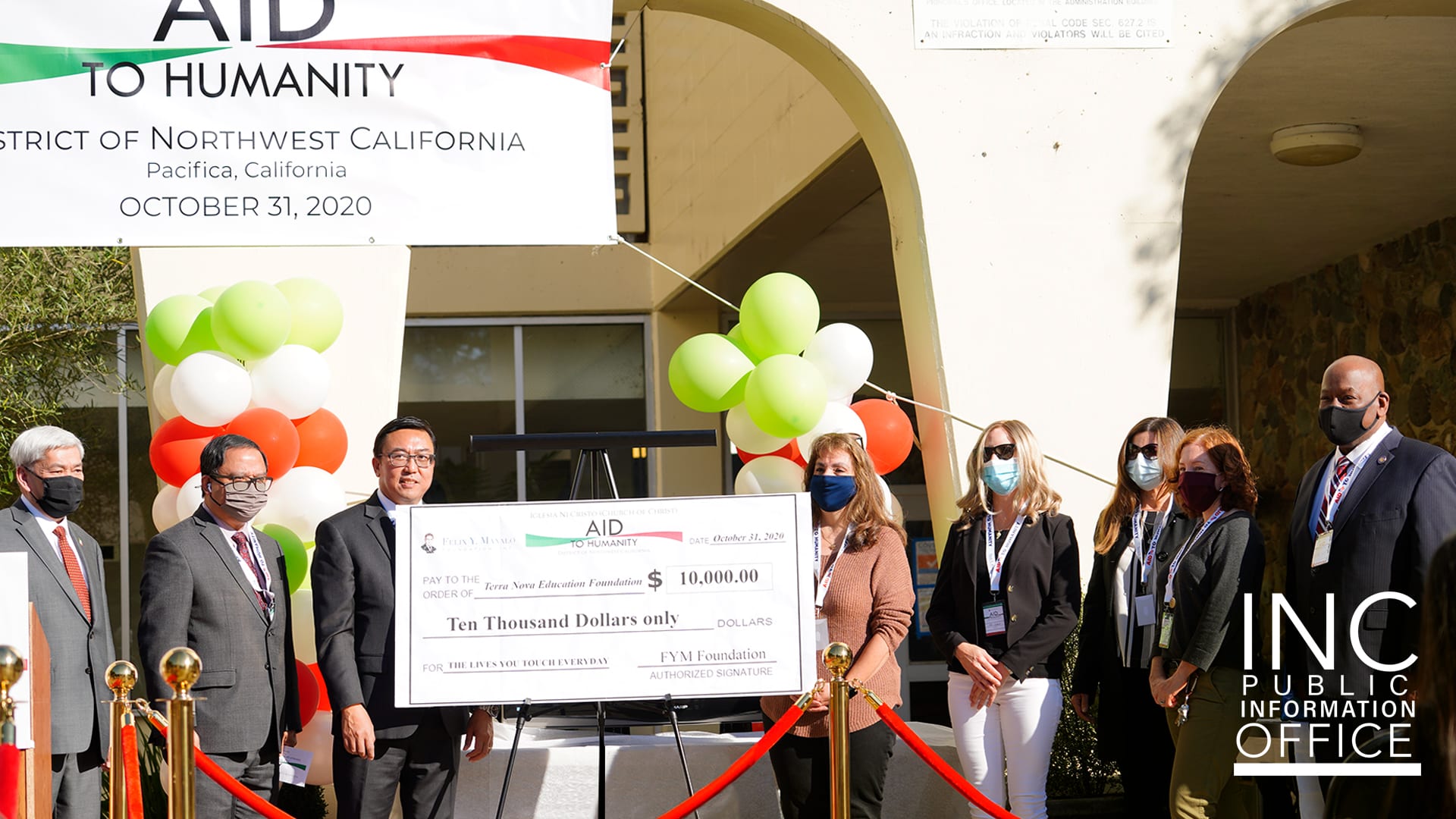 $10K AND CHROMEBOOKS DONATED TO DALY CITY AND PACIFICA, CALIFORNIA

NOVEMBER 3, 2020 (San Francisco, Calif.) — The Terra Nova Education Foundation funding programs for students and staff at Terra Nova High School in Pacifica, Calif., along with the city government of nearby Daly City, Calif. were recipients of a $10,000 monetary donation, as well as dozens of new chromebooks to be distributed to students and seniors in need from the Iglesia Ni Cristo (INC or Church Of Christ) through the Felix Y. Manalo (FYM) Foundation, Inc.

The Aid To Humanity event on Oct. 31 held at Terra Nova High School in Pacifica, Calif. was one of hundreds that took place around the world just in October alone, as part of a worldwide Aid To Humanity series benefiting thousands of individuals and hundreds of local organizations or community partners of the INC.

“The donations of [chromebooks] are sorely needed at this particular point in time… To help address the digital divide for our youth, and our elderly,” said Glenn Sylvester, Mayor of Daly City who accepted 80 chromebooks donated to assist senior citizens and other outreach programs for their community. On the relationship between the city government and the INC, he continued to say, “I look forward to getting more involved and finding out how we can help each other.”

With the goal of building long-term relationships between the INC and the communities in which it serves, the event was a prime opportunity for the INC to step in when truly needed.

“We’re not doing a lot of the things that we would do regularly, like the fundraisers we were planning… But also trying to be careful about asking for money at a time like this, it’s not an easy thing to do,” stated Rachel Cauteruccio, President of the Terra Nova Education Foundation as she accepted the $10,000 monetary donation as well as dozens of new chromebooks for their students in need. “I was especially excited to think that we could really have a long-term partnership with the Church Of Christ,” Cauteruccio said.

These donations, that will help provide resources and fund academic enrichment for community programs, is the second educational donation from the FYM Foundation for families in the region. It follows one gifted to the Boys & Girls Club of San Mateo County this past September.

This no-strings-attached donation was aimed to have the most direct impact possible on the communities. “I was just blown away by the sheer volume of the generosity. It’s not lost on me how much good this can do for the Terra Nova students and staff,” said Megan Carey, Principal of Terra Nova High School.

“It’s not only the material things that we can give, chromebooks or the cash donation; but more importantly, what we can share with them are the words of God written in the Bible — and that’s our passion,” said Esteban Inocencio, District Supervising Minister of Northwest California, a region comprising 22 local congregations of the INC around the San Francisco Bay Area.

The  Felix Y. Manalo Foundation, Inc. is a socio-civic platform of the Iglesia Ni Cristo (Church Of Christ), which regularly provides relief and immediate aid to local communities in which the Church serves. The Aid To Humanity event series just last year toured Canada and the United States, serving thousands and assisting more than 100 local organizations. Other current projects include eco-farming in Africa and the distribution of basic supplies to residents of favelas in Rio de Janeiro, Brazil. Volunteers of the foundation also offer relief aid in the aftermath of natural calamities, such as hurricanes and earthquakes in the Philippines and other disaster-stricken areas.