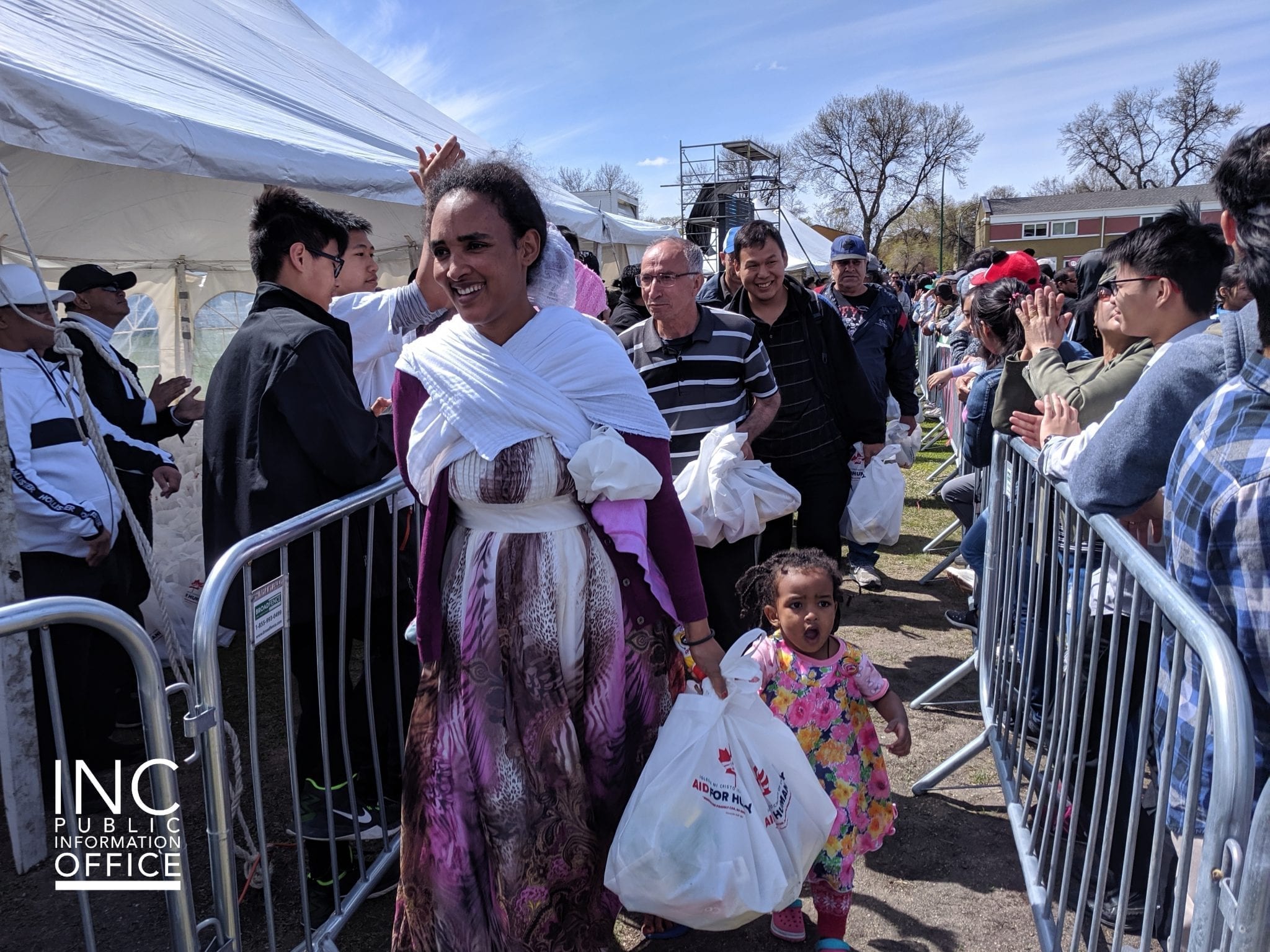 TORONTO, Ontario (May 30, 2019) – 7,000 care packages filled with food staples and personal hygiene items were offered to families and individuals in need in six major cities across the nation this past week, during Aid To Humanity visits of the Felix Y. Manalo (FYM) Foundation, Inc., the charitable institution of the Church Of Christ (Iglesia Ni Cristo or INC). 36 community organisations were also gifted monetary donations to help support the work they do for families in need.

Attendees received free items together with hot meals, prepared and served by volunteers from the INC at venues in Winnipeg, Montreal, Ottawa, Toronto, Edmonton and Vancouver May 19-26.

“Every day in many parts of the world, there are lives to improve and souls to nourish,” said INC General Auditor Glicerio B. Santos, Jr. “Our Executive Minister Brother Eduardo V. Manalo and the Felix Y. Manalo Foundation do their best to make the INC a meaningful and helpful presence where poverty needs to be addressed.”

Each event began with a prayer, followed by a video presentation highlighting the different humanitarian projects of the Church and an introduction to the Iglesia Ni Cristo – a program of events seen similarly during the numerous community events held around the world by the Church Of Christ.

“These events represent the very best of our community, joining together in a common cause … to make sure that we’re making a difference, not just here at home, but around the world … you are teaching the lesson of giving,” honoured guest Michael Levitt, Member of Parliament for York Centre, said during his speech of appreciation at the Toronto event May 23.

Turtle Island Community Centre was the first gathering place for the Aid To Humanity week, where families of Winnipeg’s North End benefited from 3,000 care packages. The FYM Foundation also presented cheques of $2,000 CAD each, to support programs of the Norquay Community Center, the Ma Mawi Chi Itata Center, the Turtle Island Neighborhood Centre and the Knowles Centre.

Kevin Lamoureux, Member of Parliament (Winnipeg North), and Ted Marcelino, Member of the Legislative Assembly (Tyndall Park) were also on hand to present a Certificate of Recognition on behalf of the Province of Manitoba, honouring the INC for their humanitarian efforts.

“The Church Of Christ has demonstrated such strong leadership in caring for people, helping people that need the help,” Lamoureux mentioned. “I applaud the congregation and in fact the Administration of the Church Of Christ for the fine work they’re doing – (not just) today in Winnipeg North, but to compliment them on the aid for humanity that they do around the world.”

This was the INC’s second Aid To Humanity Event at Turtle Island Community in less than a year.

At the Horticulture Building in Ottawa, more than 500 care packages were prepared for families of the region. Present to each accept a $1,000 CAD cheque donation from the FYM Foundation were the Matthew House Ottawa, Ottawa Food Bank, Le Gîte Ami, L’Ami de l’Entraide and Moisson Outaouais.

Just blocks away from some of Toronto’s poorest neighbourhoods in North York, families and representatives from the Flemingdon Food Bank, East Scarborough Storefront, North York Harvest Food Bank, and The Redwood Shelter came together May 23 at the National Event Venue at 1000 Finch Ave. W, North York, Ontario.

Each organisation received a $2,000 CAD cheque from the FYM Foundation to use for their respective communities. Guests in attendance, many of whom are clients of the various shelters, benefitted from 1,000 care packages filled with canned foods and personal care items.

In a city where 1 in 4 children live in low-income families, Michael Levitt Member of Parliament for York Centre expressed his thanks: “I want to recognize Bro. Eduardo V. Manalo, the [INC] Executive Minister, for his inspiring leadership of this great event, along with all of the regional Ministers gathered here.”

Nearly 1,000 individuals came together for the next Aid To Humanity event of the nation at the Howard Buffalo Memorial Center. 1,000 bags were prepared for families in the Maskwacis region.

More than 1,000 guests were welcomed onto the grounds of the INC’s Burnaby house of worship at 5060 SE Marine Drive in British Columbia, the final event of the week’s Aid To Humanity tour and largest INC humanitarian event to date in the region.

Because the poverty rate in B.C. is among the worst in Canada according to the Government of British Columbia, the Aid To Humanity event, like in the others, contributed monetary donations in support of the Progressive Housing Society, Mom2Mom Child Poverty Initiative and the Surrey Food Bank.

“Organizations like the Church of Christ are invaluable,” said Executive Director Feezah Jaffer of the Surrey Food Bank. “Donations of money and food go a long way … partners and communities like the INC do make an impact on our clients and our community. To see the camaraderie and community spirit, to see the love between the congregation members, it’s so wonderful to see events like these.”

B.C. attendee Beluarbo Marx, who received a care package containing personal hygiene essentials and food items said, “I’ve been in Canada since April. Starting off in a new country, it’s so difficult, so it’s really nice to receive this kind of package. I feel so happy and everyone is so friendly.”

INC’s socio-civic programs like this aim to strengthen the bond between the congregations of the Church Of Christ and the communities in which they serve. Global humanitarian projects, most especially in North America, are set to continue and all the more increase – a result of the INC’s growing membership and availability of houses of worship worldwide.

“We’ve heightened our assistance efforts for immigrants, indigenous peoples, female lone-parent families, members of racialized groups, persons with disabilities and other sectors where poverty incidence is higher based on Canadian population statistics,” said Santos Jr. “Our focus, like before, is on the needy and vulnerable.”

In October 2018, the INC’s continued humanitarian work was also recognized in the Legislative Assembly of Manitoba.