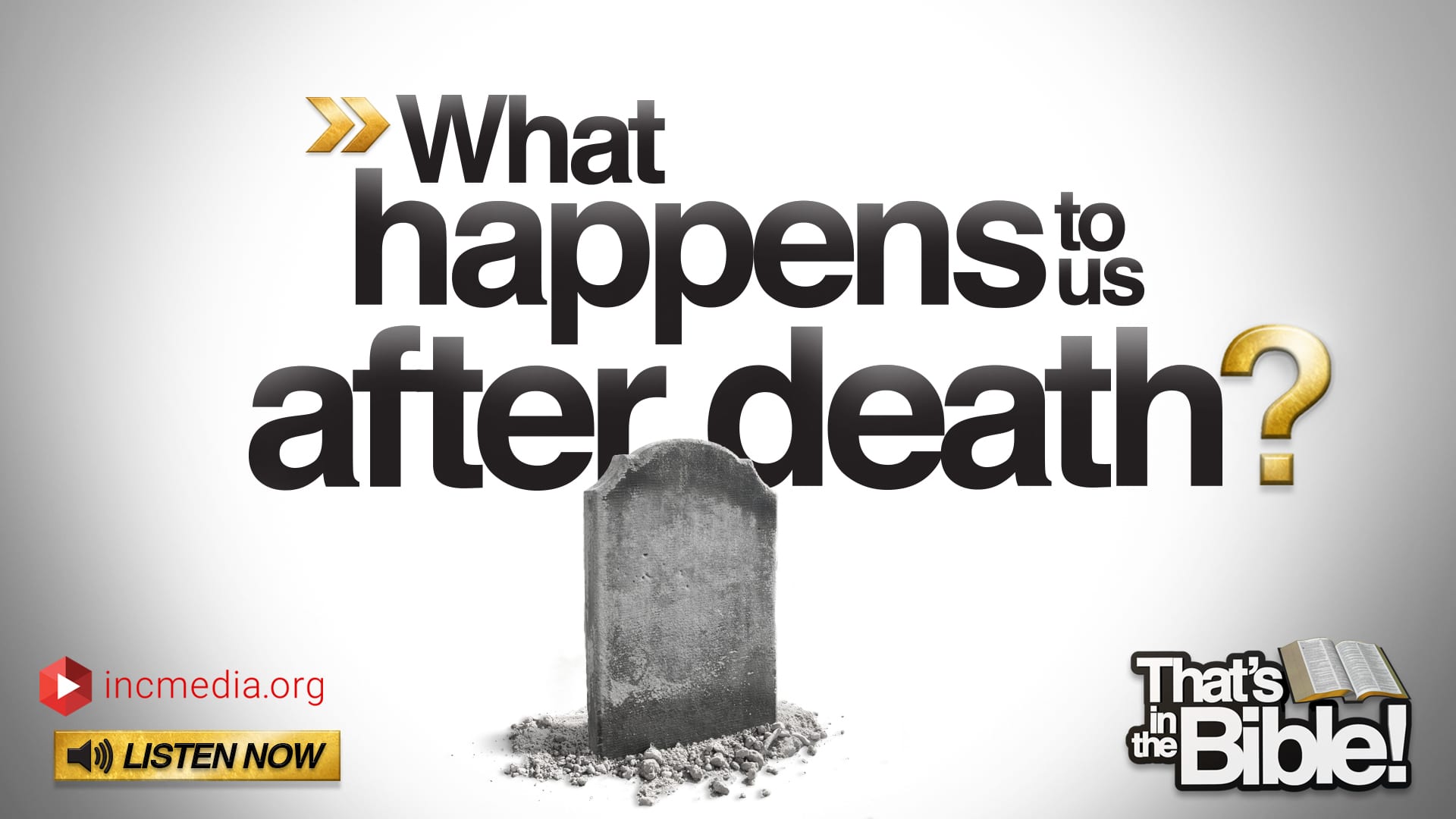 What Happens to Us After Death?

What happens to us after we die? Does anything happen beyond one’s last breath? You asked, the Bible answers.

Brother Bob Pellien: I’m Brother Bob Pellien, thank you for joining us on this podcast episode of That’s in the Bible! Let’s go to our next question which comes in via email from Tom Nguyen in Garden Grove, California. He asks, “What happens to us after death?”

What Happens To Us After Death?

Brother Bob: Well, that’s a nice question. There are many people who are wondering what’s going to happen to them after they die and there’s an endless number of answers that religions of this world are very willing to provide. Before we can know really what happens to a person after death, it’s essential to know that a person is actually composed of three parts mentioned here in the book of 1 Thessalonians chapter 5, beginning in verse 23:

Now may the God of peace Himself sanctify you completely; and may your whole spirit, soul, and body be preserved blameless at the coming of our Lord Jesus Christ.

What Happens to the Soul After A Person Dies?

Brother Bob: The Prophet Ezekiel spoke of it in chapter 18 in verse 4. What did he have to say about what happens to the soul? 18:4 reads this way:

Brother Bob: The Bible makes mention [of what] will happen to the soul: it dies. Whose soul dies? The Bible mentioned there: the soul of the sinner. Well, who’s the sinner? The Bible, in 5:12 of Romans, makes clear that all people commit sin, no one could say they’re sinless. It was only Jesus that was without sin. All people, then, commit sin. All people’s soul dies. How about the spirit? How about the body? What about the other two components?

What Happens to the Spirit and Body After A Person Dies?

In Ecclesiastes, we turn to Ecclesiastes chapter 12, wherein the following is recorded in verse 7. It says this:

Brother Bob: The spirit returns to God. The body, the dust returns of the dust from whence it came. The soul dies. That’s what happens to the three parts. But the question of Tom is more like, “Well, what about after that? What about after that? What does what does all that mean? What about my consciousness? What will happen after I die and go to the grave and my [body] return to dust, my spirit returns to God. Well, what about my thoughts? What about my consciousness? Will I no longer exist even in that format? Is there something that a person who has already died and has been buried already [that] they could benefit from the things that are done here on Earth, but they still have that contact?”

After Death, Can a Person Keep Their Thoughts and Consciousness?

Brother Bob: These are the kind of questions that many are asking relative to the question that Tom asked. So let’s continue in Ecclesiastes chapter 9 this time, [verses] 5 and 6:

For the living know that they will die; But the dead know nothing, And they have no more reward, For the memory of them is forgotten. Also their love, their hatred, and their envy have now perished; Nevermore will they have a share In anything done under the sun.

Brother Bob: Tom, dear friends, the Bible is clear. They will never have a part in anything that is done under the sun. Well, there’s so many religions that will be teaching people to say novenas, say prayers, have masses, do other kinds of rituals and ceremonies for the dead. But the Bible is clear. They will not have any more share, any part in anything that’s done under the sun. Do you mean to say then, that’s the end of it all? Is there nothing more?

What Else Happens After Death?

For the Lord Himself will descend from heaven with a shout, with the voice of an archangel, and with the trumpet of God. And the dead in Christ will rise first. Then we who are alive and remain shall be caught up together with them in the clouds to meet the Lord in the air. And thus we shall always be with the Lord.

Brother Bob: What happens next, then, [to] those who have died in Christ? Although they may have been in the grave for such a long time, the Bible makes clear that they will be brought out of the grave when the Lord descends from heaven.

Separate the Goats from the Sheep

Brother Bob: And our Lord Jesus spoke of this as well in the book of Matthew chapter 25. Let’s go ahead and read the quote from our Lord Jesus Christ. Matthew 25. We’ll read verse 33 and 34, as well as 41:

And He will set the sheep on His right hand, but the goats on the left. Then the King will say to those on His right hand, ‘Come, you blessed of My Father, inherit the kingdom prepared for you from the foundation of the world: “Then He will also say to those on the left hand, ‘Depart from Me, you cursed, into the everlasting fire prepared for the devil and his angels:

Brother Bob: Jesus spoke of it in these terms when he said that on that moment, they would be separated. On the left would be what He called the goats that would be cast aside into eternal destruction. And those on the right He called his sheep, and they would inherit the kingdom prepared for them by the Father in heaven. What will be the basis of that judgment to determine whether or not we would be those goats on the left or on the right? Revelation chapter 20, verse 12. The basis will be as recorded here by Apostle John in his writings in verse 12:

And I saw the dead, small and great, standing before God, and books were opened. And another book was opened, which is the Book of Life. And the dead were judged according to their works, by the things which were written in the books.

Brother Bob: So the Bible does make mention, then, of the basis of that judgment. It will be what’s recorded in the books that will be read from on that upcoming Day of Judgment.

Thanks for listening. I’m Brother Bob Pellien, and we hope you join us next time on That’s in the Bible. Please feel free to email your questions to answer@incmedia.org. For more programming of the Iglesia Ni Cristo, Church Of Christ, and to find a local congregation near you, please visit incmedia.org.