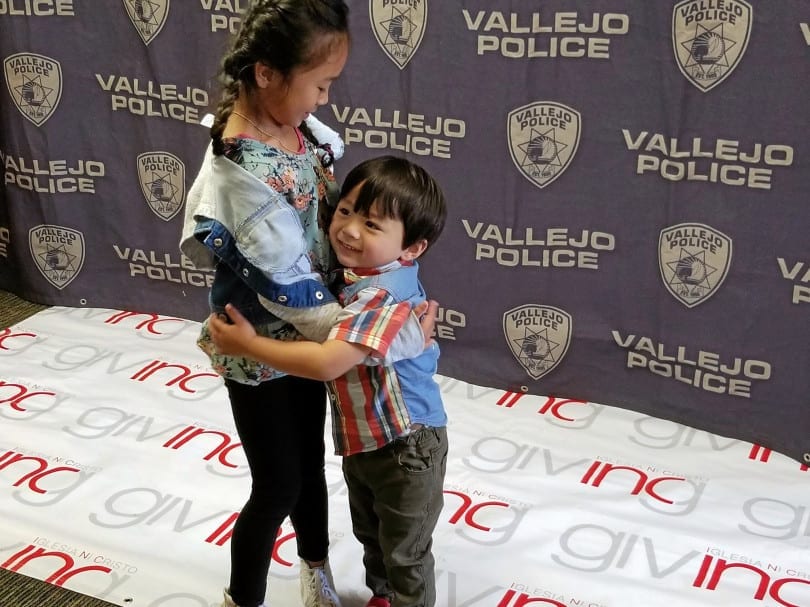 Sometimes it’s nice to just say thank you and give a little back, especially to our town’s first responders. That’s why the I.N.C. Church in Vallejo put together a show of gratitude for the police and fire departments on Saturday.

Over 50 parishioners and their children arrived at the police station on Amador to deliver lunch, smiles, and doughnuts, of course. In return, the churchgoers got a private tour of the facility.

The I.N.C. Church (Iglesia Ni Cristo) has been in Vallejo for 47 years, according to life-long member Ulysses Umali. There are 550 people in the local congregation, but Umali said that there are branches of the church all over the world — in 142 countries.

Saturday’s aren’t exactly the busiest at the station, but plenty of officers were out in the field working. Still, several were on hand like Sergeant Brenton Garrick, Lieutenant Herman Robinson, and officer Theresa Augustin. Police Records Supervisor JoAnn Alcantara was also there, and various patrol officers dipped in and out.

After everyone posed for a huge group picture out front the throng headed inside the department to mingle and take more pictures.

For those who have never been inside the station, they might be surprised at how small the actual administrative areas are. The entire compound around it takes up quite a bit of space, however, with big lots for police vehicles and equipment.

Sgt. Garrick pointed out the main lot behind the station, which at his urging is now surrounded by a big fence and barbed wire. Apparently some people were actually intrepid enough to go on the lot and vandalize or steal things, surely a dumb idea when you are surrounded by police. But now it’s incredibly difficult to attempt it at all.

Garrick and others led people on a tour of the entire place. Lieutenant Robinson was working Watch Command and pointed out a picture of his father, Alfred, who joined the force in the middle of the 20th Century. The department honors him with a large, framed shot of him in uniform. Though his son Herman is the longest-serving officer in the department, with over four decades of service, the road to law enforcement was not easy for his dad. “I like to say I have the job my father couldn’t have,” said Lt. Robinson.

Alfred Robinson, an African-American man, started out as a janitor at the station and worked his way up to being a police officer. He was the first civil servant of color in Vallejo. It didn’t take long however for someone to intervene and declare that there could be no black police officers in Vallejo. Alfred Robinson went back to being a janitor.

Herman agrees that his father must’ve held some resentments, but they didn’t cloud his spirit or deter his son from becoming a law enforcement officer himself.

Sgt. Garrick led a tour of his office, where he juggles many hats including S.W.A.T. team duties, accounting, hostage negotiation, grant proposals and community outreach.

We often think of police work as dangerous, but it can be just as challenging to work at the front desk of the station, according to Police Record Supervisor Alcantara. “People don’t generally come into a police station for happy things,” she said. “But hopefully, with our help, they leave a little bit better.”

Back in the community room, party-goers were treated to salads, chicken, chips, cookies, and drinks. Little kids hammed it up for the cameras.

“Do you want to be a policeman when you grow up?” asked the grandfather of A.J. Laxa, a 3-year-old boy and member of the church. He nodded his head enthusiastically. Apparently, last month A.J. said he wanted to be a fireman.

Either way, everyone agreed he would end up in a noble profession.