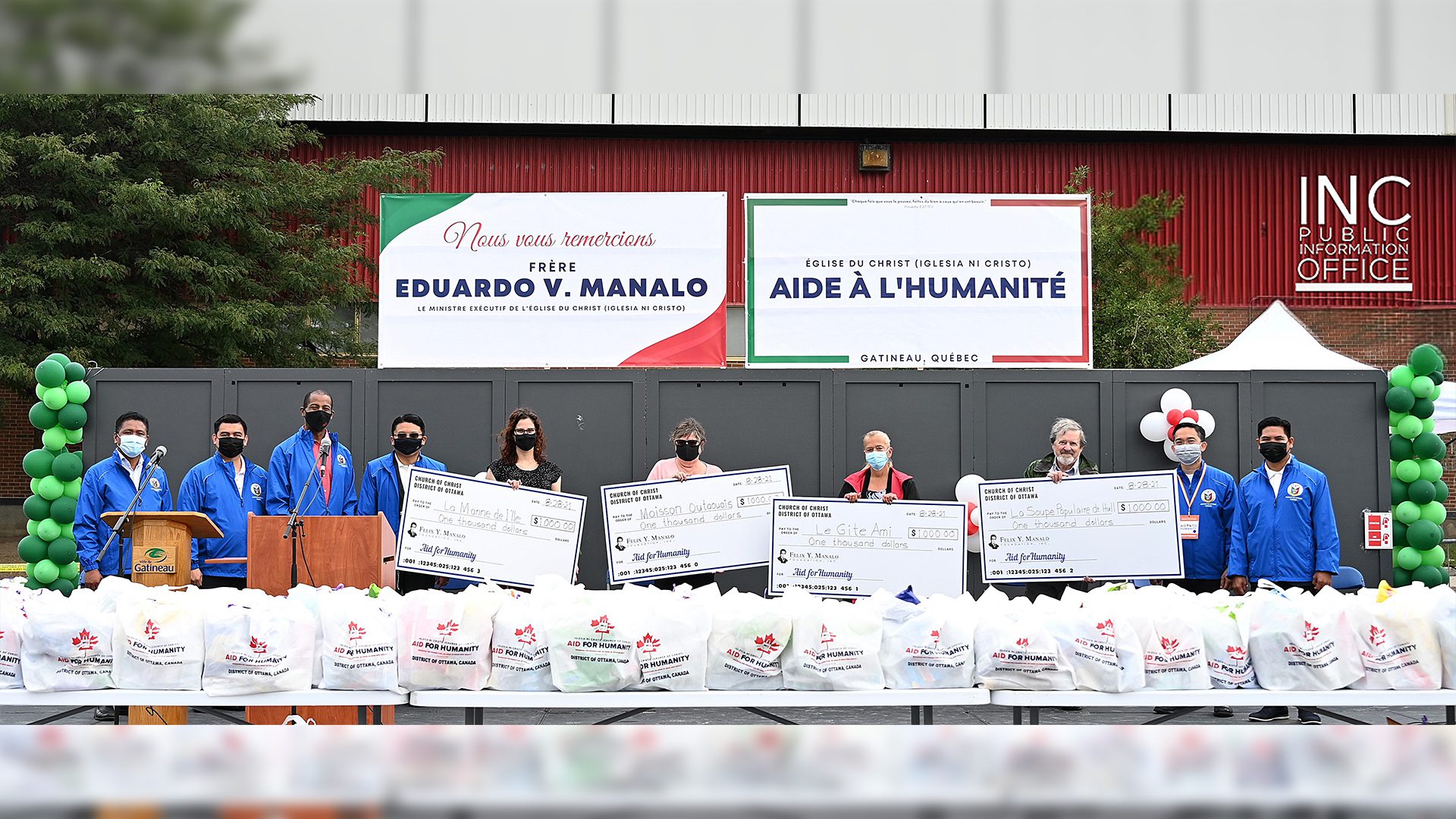 Gatineau, Quebec — The Iglesia Ni Cristo (Church Of Christ) through its charitable arm, the Felix Y. Manalo (FYM) Foundation, Inc., donated about a thousand care packages to residents of Gatineau in Canada, and also donated funds to four charitable organizations in the area.

Approximately 1,000 care packages, filled with personal hygiene products and a variety of non-perishable food items, were distributed to the residents of Gatineau.

These donations were given at an Aid to Humanity event held in the Robert Guertin Center Lot on Aug. 28, 2021.  Attendees were also provided food, refreshments and entertainment.

Greg Fergus, a member of the House of Commons of Canada, attended this event and thanked the Iglesia Ni Cristo (INC) for giving hope and helping the people.

“I’d like to thank all of you for putting your faith in action, to helping out our community and to be showing once again for giving people hope, showing people love, and also for giving them an opportunity to come away for some much-needed supplies,” he said in his opening remarks.

“That really is a small indication of how we treat everyone as our brothers and sisters.”

He also extended his appreciation to the FYM foundation and its volunteers.

“So congratulations to all of you for the work you have done. I would really like to thank the foundation and all the work they do, not only here, but around the world.” [translated from French]”.

Valérie Beauclair, the treasurer of La Manne de I’lle, which is an organization that offers its services to help impoverished residents in the Hull Island area and surrounding areas, also thanked INC Executive Minister Brother Eduardo V. Manalo, and the volunteers for the event: “Well, we would like to thank Mr. Manalo, as well as all the volunteers who participated in the preparation of the event today. We are also thankful for the donation to our organization. Continue the good work.”  [translated from French] said Beauclair.

In the website of Moisson Outaouais, it cited data from CISSS-O that said 7% of the total population of the Gatineau Outaouais region was affected by food insecurity in 2017. “This represents close to 29 000 people, of which 5 300 were under 12 years old,” it said.

Through humanitarian efforts of the Felix Y. Manalo (FYM) Foundation, the charitable arm of the INC, and the INC Giving Project, socio-civic activities continue to be conducted in order to alleviate such food shortages that regions around the world like Gatineau are experiencing. INC members and volunteers aim to extend help and contribute positively to their communities, most especially to those in need.

The Iglesia Ni Cristo was registered in the Philippines on July 27, 1914 by its first Executive Minister, Brother Felix Y. Manalo. Since then, the Church has spread to 159 countries and territories around the world, with its members coming from 147 ethnic backgrounds. The rapid growth of the Church is spearheaded by the dynamic leadership of the current Executive Minister of the Church, Brother Eduardo V. Manalo.