Families in Malawi and Kenya Benefit from 50,000 Free Food Parcels From the Iglesia Ni Cristo 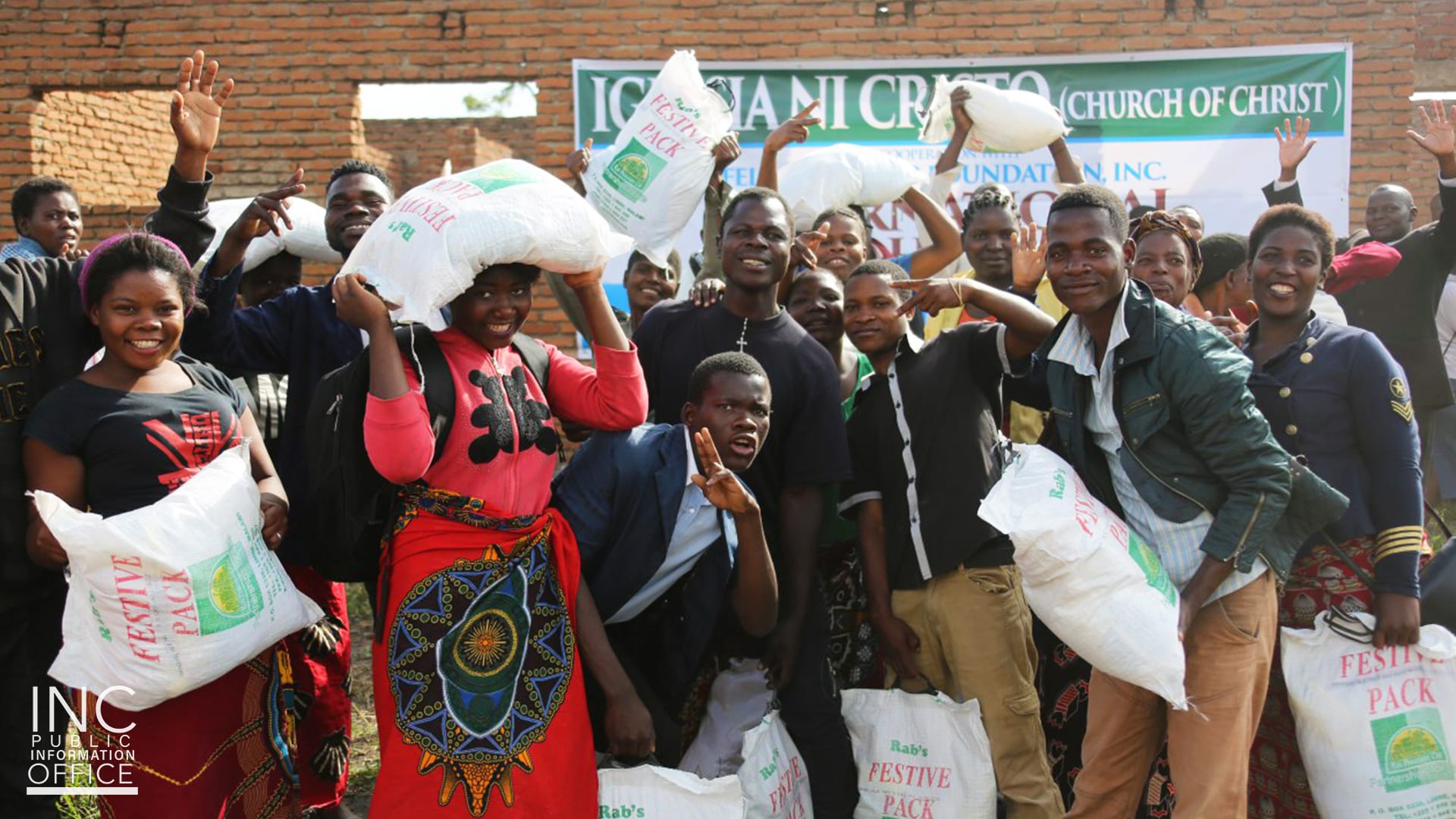 MALAWI (June 25, 2018) – 50,000 parcels of free food were provided this week to families and residents of Malawi and Kenya during visits of the Felix Y. Manalo (FYM) Foundation, the charitable institution of the Iglesia Ni Cristo (INC or Church Of Christ).

On June 19, the National Hockey Stadium in Blantyre City, Malawi served as the venue where locals and even residents of villages in the city outskirts gathered, including the villages of Chileka, Suya, Dirande, Chilomoni, Bangwe, Lunzu, Mbayani, Machinjiri, Manese, Mdala and Chatha. The event began with a prayer, followed by a video presentation explaining the different humanitarian projects of the Church, as well as an introduction to the Iglesia Ni Cristo – a program of events seen similarly during the numerous community events held around the world by the Church Of Christ.

Event organizers and volunteers traveled from the Philippines, joining local members of the INC congregations in Southern and Northern Africa in greeting and distributing the food parcels to the thousands who lined up hours before the announced time. Food parcels filled with basic food items such as biscuits, kitchen salt, soya, margarine, beans, sugar, and maize were provided to residents.

The next day, June 20, another outreach activity was held in the township of Malawi’s Southern Region, Mangochi. Families from the villages of Samama, Kumwa, Madeweri, Tongole, Malunda, Katolomela, Bolera, Dicungulo, Mauwa, Mdola and Muchoca traveled to receive food parcels from the Church of Christ for the first time.

Following the events in Malawi, the Church distributed food parcels to two of the most impoverished areas of Kenya. On June 23, the Church Of Christ went to the Children’s Garden Home and School, Kawangware Division, a village on the outskirts of Nairobi County and regarded as one of Africa’s largest growing slum areas. Many orphans and widows residing in the area greatly benefited.

The day after, on June 24, the Church Of Christ distributed thousands more food parcels at the Ligi Ndogo Grounds in Nairobi, Kenya. Residents in the Kawangware Village were greeted with Christian music performed by INC members from the local congregation of Kibera. Kenya is one of 37 countries in Africa in which the Church Of Christ has a growing presence. And thousands of more residents were introduced through this aid, including recipients from throughout greater Nairobi, Kiambu County, and Kenya’s Central Province.

Last November of 2016, the Church Of Christ held a similar Aid For Humanity event for residents of Kibera, Kenya, which was recognized as the first and the biggest humanitarian mission organized by a religion in the history of the country.

The International Aid For Humanity events took place after the Iglesia Ni Cristo held its world-recognized Worldwide Walk to Fight Poverty in May 2018 simultaneously in more than 300 sites and across 18 time zones, which aimed to raise awareness for the global concern of poverty and the INC’s continuous efforts to combat the issue with action, specifically for those in Africa’s impoverished communities.

About 71 percent of Malawians live in extreme poverty, according to the United Nations Commission on Trade and Development, which places Malawi among the five poorest countries in the world.

“I’m very grateful to the Church of Christ, particularly to Mr. Eduardo V, Manalo, for distributing this food to us, to the people of Mangochi. This is very special to us. So we are thanking him indeed,” said Nwaliwa.

Since INC Executive Minister Brother Eduardo V. Manalo’s first visit to Africa in 2014, the progress of the INC in the continent of Africa has flourished. From numerous outreach events providing food parcels to thousands at a time, to helping establish two self-sustaining eco-farming communities in Ladybrand and Petrusburg, South Africa, these projects have connected residents to a stable livelihood and a more promising future. The 508-hectare eco-farm in Ladybrand, alone, employs more than 200 South African locals.

The Church Of Christ continues to fulfill its pledge of sharing the gospel and extending help, to the best of its ability. Its unprecedented growth under the leadership of Executive Minister Brother Eduardo V. Manalo is expected to continue in 2018 across the continent of Africa.

About the Iglesia Ni Cristo (INC) or Church Of Christ)

Spiritual missions in countries in Africa, Latin America and Europe have also recently increased – a result of the INC’s growing membership and availability of more houses of worship worldwide. The Church Of Christ partners with local governments and community establishments for its ongoing international outreach events to strengthen the bond between the congregations of the Church Of Christ and the communities in which they serve – through aid and services, promoting education, socio-economic well-being, environmental awareness and health improvement.FOR IMMEDIATE RELEASE Iglesia Ni Cristo (Church Of Christ) Public Information Office / PIO@iglesianicristo.net