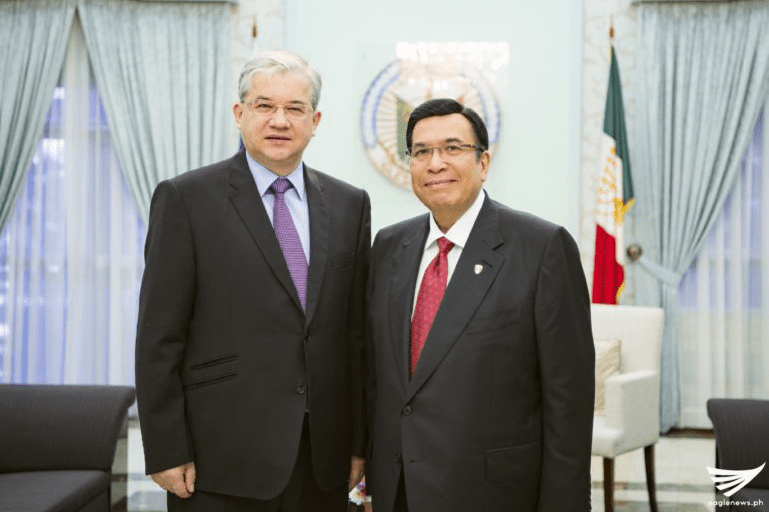 The Russian ambassador said that Russia is very much open to Filipinos as he pushed for more cordial and friendly relations between Russia and the Philippines.

“We need to explore all possible opportunities how to promote our bilateral cooperation. It’s time for Russia to discover the Philippines and it’s time for Filipinos to discover Russia,” the ambassador said in an interview at the Eagle Broadcasting Studio done after the courtesy call.

The key is for “more people to people contact” between Russia and the Philippines, he said.

INC minister Brother Edwil Zabala said that in the visit, both Brother Eduardo and Ambassador Khovaev “expressed mutual respect” and hope for better cordial relations with each other.

“The Church Of Christ indeed is growing around the world and establishing more and more local congregations in different countries. And among those countries where the Iglesia Ni Cristo can now be found is the Russian Federation,” Zabala said.

Many INC Central employees also warmly welcomed the Russian ambassador, as they lined up and waved small replicas of the Russian flag when he came out of the INC Central Office’s Bulwagan, together with the INC Executive Minister.

Ambassador Khovaev said Russian interest in the Philippines now is very high, and the Russians are looking forward to more friendly relations with Filipinos.

“I’m happy to be here,” he said as he recalled that the bilateral ties between Russia and the Philippines have not really prospered before.

The Ambassador said that the Russian government is also strengthening ties with all its ASEAN partners, like the Philippines.

“Our aim is to become a new reliable partner and close friend of the Philippines because we have a lot in common,” he said. “What we need is to become consistent and persistent.”

He noted that the major obstacle before on improved bilateral relations was “an incredibly low level of mutual awareness, mutual knowledge.”

“And there is only one recipe to improve education, to intensify people-to-people contact at all levels,” he said.

The Russian ambassador also noted how both the Philippines and Russia are both similar to each other, in that both societies are “multi-religious”.

“We have a lot in common. Simply because our daily life is mostly based on the same Christian values. So most Russian people are Orthodox people, about 80 percent are Orthodox Christian people,” he said. “It’s a very good basis for our friendship.”

This is the fifth courtesy call made by an ambassador of a foreign nation to the INC Executive Minister this year.

In July this year, the Ambassador of the Republic of South Africa, Martin Slabber also made a courtesy call to the INC Executive Minister, Bro. Eduardo V. Manalo, as he reached out after hearing about the Church’s evangelical and outreach activities in South Africa, as well as rapid expansion of the Church in the entire African continent.