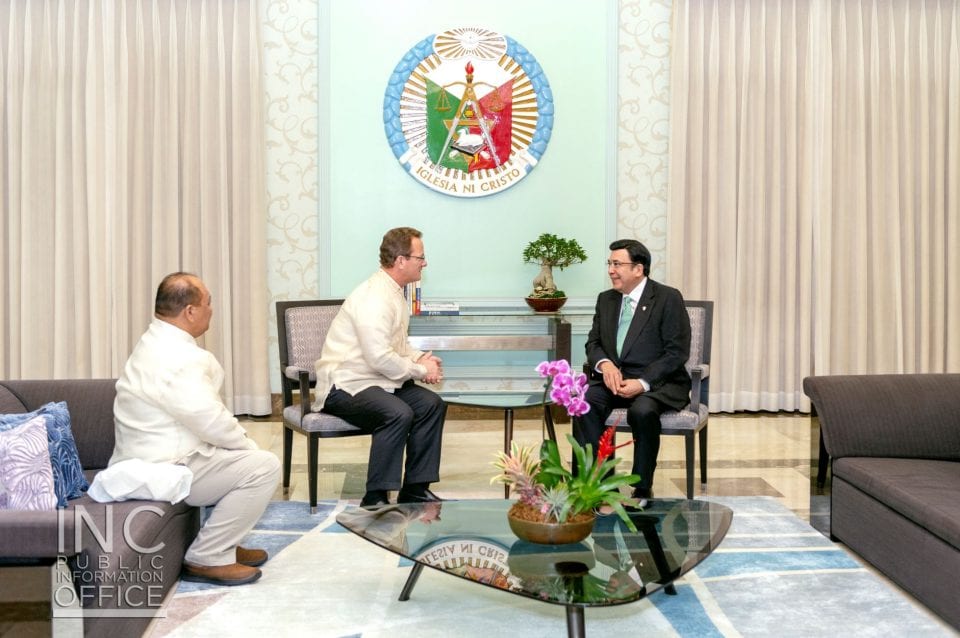 Lt. Gov. Tenorio was accompanied by Special Assistant, Alfredo Antolin who is of Filipino descent, when he visited the Executive Minister on Tuesday morning, and thanked the INC leader for his support and for his leadership of the Church whose brethren had contributed greatly to Guam’s progress.

“I really appreciated the time that the Iglesia Ni Cristo and, of course, Ka Eduardo Manalo, and his kind generosity and making time to meet with me,” said Tenorio who also conveyed to the INC leader the Guam government’s greetings for the Church’s celebration of its anniversary this July 27.

“I wanted to thank him for the work that he had done and to congratulate him of course on the 104th anniversary of the Iglesia Ni Cristo,” he said.

This was Lt. Gov. Tenorio’s second courtesy call to the INC leader.

The first was on November 21 last year when he presented to Brother Eduardo a proclamation from Guam that recognized the Church’s contributions to the island and the rest of the world.

The latest courtesy call on Tuesday came as the Church is preparing to celebrate its 104th anniversary and its 50th year of its mission outside the Philippines.

“I just wanted to congratulate all the brethren of the Iglesia Ni Cristo on the 104th anniversary of the establishment of the Church and thank them for all the work that they do for their community, and hope that their next 104 years are as progressive and as well done on the establishment of the Church and the foundation of the faith as they have in the first 104 years,” the Guam official said.

Lt. Gov. Tenorio conveyed to the INC Executive Minister the appreciation of the government of Guam led by Governor Eddie Baza Calvo, as well as the people of Guam, for the Church’s contributions to their island.

In his first courtesy call to the INC Executive Minister in November last year, the Guam official presented a framed copy of Proclamation No. 2017- 60 signed by Guam Governor Eddie Baza Calvo, that also declared July 27 as “Iglesia Ni Cristo (Church Of Christ) Day” that year.

“I met with him (Brother Eduardo) in November and it’s been a number of months, and I wanted to come and thank him again, and thank the Church for the good works that they do for the people of Guam,” Tenorio said.

The Guam official also noted that his island is also looking forward to the 50th celebration of the INC’s establishment in Guam in March next year, adding that on July 27 this year, Guam is again doing a proclamation for Iglesia Ni Cristo day.

“And I told Ka Eduardo that we are again nominating him to continue as the honorary ambassador for Guam which will be something that we’re hoping to include in the next proclamation on the Iglesia Ni Cristo day,” Tenorio said.

He expressed his admiration for the INC congregations in Guam, saying the INC brethren were very, very kind, and very humble, and are models in their respective communities.

Tenorio said he also makes it a point to also attend Church activities whenever he is invited by the INC brethren.

“Oh, they’re amazing! I meet them all the time, and when I’m out in the public, talking to people, they’ll tell me, ‘oh I’m a member of the Iglesia Ni Cristo’, or ‘I saw you at the Church’. They’re very, very kind people and I tell you they’re very humble, and have contributed a lot to the community,” he said.

“I always go as many times as I can when they reach out in their events,” he noted.

Tenorio said he has “so many good experiences with the Iglesia Ni Cristo membership” and noted the discipline of the church members which he observes in his own village where there is also an INC house of worship.

He also expressed admiration for the various socio-civic projects that the Church does for various communities in Guam, as well as the great faith in God that the INC members have.

“It’s always nice to see the people reaching out. People really make a big impact on the island, when they reach out to do good things for the citizens, and the people living on the island. They’re really very kind people, I have to tell you. I have really many, so many good experiences with the Iglesia Ni Cristo membership,” he said.

Tenorio said that there are also many Filipinos living in Guam, and that the government is also making sure that Filipino workers are treated fairly and receive just compensation.

“We have many Filipinos throughout the island. Every village has a great number of Filipinos living there. And we’re very much looking forward to Ka Eduardo and the Iglesia Ni Cristo leadership here in Manila,” he said as he noted the appointment early this year of the INC leader as the Philippine government’s special envoy for overseas Filipino concerns.

Just last month, on June 26, the senate chairman in Guam of the committee on health, tourism, military affairs and senior citizens, Senator Dennis Rodriguez Jr., made a courtesy call to the INC Executive Minister where he also thanked Brother Eduardo for the positive contributions of not only the Church, but also of the Church members in Guam.

Senator Rodriguez, whose parents hailed from the Philippines, also expressed admiration for the Church’s efforts to help people through its socio-civic, outreach programs, and more importantly through its “very spiritual” evangelical missions and worship services.

There are currently thousands of INC members in Guam who are part of the Ecclesiastical District of Marianas Islands. The INC in Guam has at least four local congregations: Harmon, Apra Heights, Yigo, and Mangilao.

Guam was also one of the more than 300 sites across 18 time zones which joined the May 6 Worldwide Walk to Fight Poverty of the INC that had set new Guinness records.

As the INC celebrates its 104th anniversary this July 27, Church membership continued to expand across the globe and consists of at least 133 nationalities.

The Church now has some 7,000 congregations and missions in 143 countries.  (With an INC-PIO release)