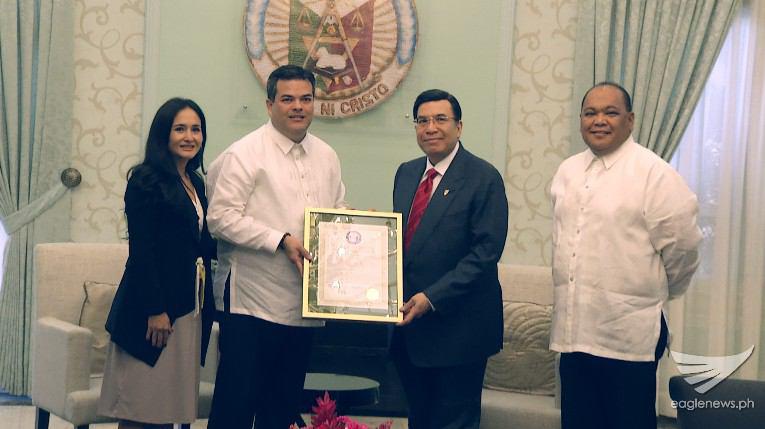 Senator Rory J. Respicio, the majority leader of Guam’s 33nd legislature, made a courtesy call to Iglesia Ni Cristo Executive Minister Brother Eduardo recently, to present the legislative resolution of Guam that recognized and congratulated the INC on its 102nd anniversary this past July 27.

“The Iglesia Ni Cristo is a very resilient Church, and the Church is here to stay,” said the US senator who flew to the Philippines specifically to present to Brother Eduardo Guam’s legislative resolution no. 419-33, which he had introduced and which was supported by 14 other legislators of Guam.

“The reason for this visit is to present the legislative resolution which recognizes the 102nd anniversary of the INC, and also to recognize the INC for all its contributions to the island of Guam,” he said in an interview.

“I am always indebted to the Filipino people for its continued contributions (to Guam), and I’m here today to recognize the Iglesia Ni Cristo and say that the people of Guam are indebted to the positive act the Church has made to our island,” Senator Respicio explained.

The senator from Guam said the courtesy call to Brother Eduardo was “a very special visit.”

“It’s a very nice blessing as you know the Iglesia Ni Cristo has a huge contingent on our island of Guam and we share a very special relationship between the Filipino community and the people of Guam,” he said of his very first visit to Brother Eduardo.

According to the resolution presented to the INC leader this week, the Committee on Rules of Guam’s Legislature, and on behalf of Guam’s Legislature and the people of Guam, “recognize and congratulate (the) Iglesia Ni Cristo (Church Of Christ) on the celebration of its 102nd anniversary of faithfully serving Christ.”

The resolution also commended the INC members “for the positive impact their Church has achieved in the advancement and well-being of the people of Guam, the Philippines, and numerous other nations around the globe.”

Guam’s legislators also extended their congratulations to the INC’s “leaders, congregation and brethren for their contributions and services that have helped to bring strength, solace, and progress” to Guam.

Guam’s 33rd legislature recognized that “for many decades, the Iglesia Ni Cristo has sustained a proud tradition of helping those in need, and it continues to celebrate God’s blessings through spiritual development and maturity for our community of Guam and abroad.”

It said that the INC has also “greatly contributed to the spiritual life of (Guam’s) community and to the progress” of the whole island of Guam.

The resolution noted that the people of Guam were also “honored to join the celebration” of the INC’s 102nd anniversary, and are also “grateful for the countless contributions its members have made throughout its history, both here and abroad.”

“The membership of the Iglesia Ni Cristo comprises at least 110 nationalities, and maintains about 104 ecclesiastical districts in the Philippines and in 100 other countries and territories, spanning six continents,” the resolution noted.